Finnish voters opted for reliability and stability by overwhelmingly handing a second term to President Niinisto. His huge victory means Finland will avoid a presidential runoff for the first time in history. 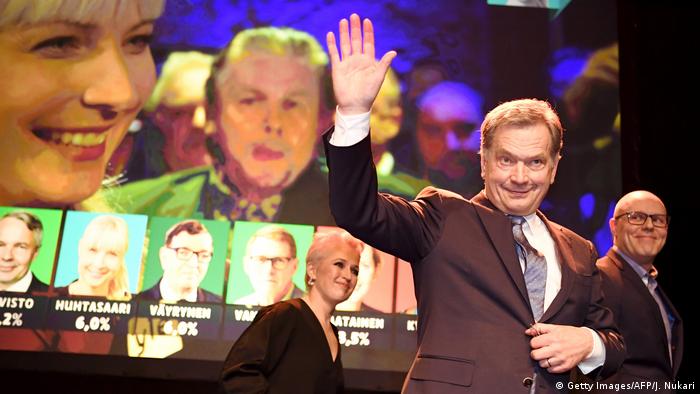 Finnish President Sauli Niinisto clinched an overwhelming victory in the first round of elections on Sunday.

Niinisto, a former finance minister and parliamentary speaker, won 62.7 percent of the votes cast. His closest rival, Pekka Haavisto of the Greens, got 12.4 percent.

None of the other six candidates received more than 7 percent of the vote.

Riding on his massive popularity, Niinisto comfortably avoided the need for a runoff, a first since Finland introduced a two-round presidential election by popular vote in 1994.

"I am very surprised at this kind of support. I must think hard how to be worthy of it," 69-year-old Niinisto told reporters

"I have no intention of making changes just for the sake of making changes. Surely we will follow very closely what is happening outside of Finland, globally, and if needed, then we will surely react," he said.

Pekka Haavisto, who also finished second in 2012, conceded the race long before the vote-count was completed, telling the Finnish national broadcaster that Niinisto "is the republic's new president with this result."

Read more: Finns seek calm amid US and Russian unpredictability

Niinisto has been a fixture in Finnish politics since first winning a parliamentary seat for the conservative National Coalition Party in 1987. He followed it up with stints as justice minister and finance minister, concurrently serving as deputy prime minister, before winning his first six-year term as president in 2012.

In these elections, Niinisto ran as an independent with no association to the NCP that he earlier chaired.

During his first term as president, Niinisto is credited for having deepened ties with the United States and NATO without antagonizing Russia, with whom the Nordic country shares the longest border in the bloc.

Pro-EU President Niinisto was instrumental in maintaining ties with Russian President Vladimir Putin, despite Finland backing western economic sanctions against Russia over its  annexation of Crimea in 2014. He faced flak for inviting Putin to visit shortly after the annexation.

Recent polls predicted Niinisto would get between 58 and 63 percent of the vote and Haavisto of the Greens would garner some 14 percent.

Almost 4.5 million voters were eligible to vote for the president, a largely ceremonial post following changes to the constitution adopted in 1999.

But as head of state, the president is the key foreign policy player, particularly on issues outside the European Union.

A recovery in the labor market has reduced poverty and improved social justice across the EU, according to the Bertelsmann Foundation. But the gap between northern and southern countries remains wide. (16.11.2017)

If one Finnish presidential candidate has his way, Finland will upgrade its current NATO partnership to full-fledged membership. But not all Finns back the idea — and Russia's not-so-friendly statements may play a role. (09.10.2017)

Finland's comprehensive approach to keeping its population safe is seen as a model for Europe. Constantly honed resilience training prepares the country's military and civilians for deep freezes or deadly foes. (04.10.2017)