Newly-elected Fiji Prime Minister Vorege Bainimarama has been sworn in at Government House. He will be the country's first democratically elected prime minister after eight years of military rule. 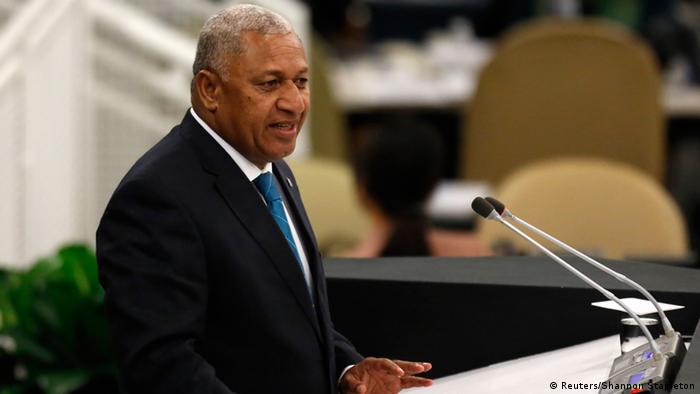 Fiji's former military leader Vorege "Frank" Bainimarama was sworn in by President Epeli Nailatikau on Monday, during a ceremony at Government House in the Fijian capital of Suva.

"I will serve the country as the prime minister of all Fijians," said Bainimarama, who stepped down as military chief in March.

In the nation's first democratic election after eight years under military rule, a high turnout of 83.9 percent of the registered electorate helped to secure Fiji First Party with 32 of the 50 parliament seats, which were agreed last year under the new constitution.

The 60-year-old had led the Pacific island country as prime minister since 2007 after seizing power in a bloodless coup on the pretext of corruption and discrimination against ethnic Indians who comprise about 40 percent of Fiji's 900,000 citizens.

For the first time, Bainimarama this year extended full voting rights to ethnic Indians, giving them an equal footing with the indigenous Fijians. Tensions between the two races were the underlying cause of four coups in Fiji since 1987. In 2000, members of Fiji's ethnic population held the first Indo-Fijian Prime Minister hostage in parliament for 56 days.

Despite several opposition parties raising concerns about the integrity of last week's election, including tampered ballot boxes, the Multinational Observer Group overseeing the nation's historic election did not find evidence of misconduct or irregularities and called the election a "credible" poll.