Fighting the spread of illegal landfills in France as trash piles up in ′sea of waste′ | Environment | All topics from climate change to conservation | DW | 13.05.2019

Trash is piling up in France, hidden in plain sight across the suburbs and the countryside. Starting this year, the government is taking action against the dozens of illegal dumps polluting its territory. 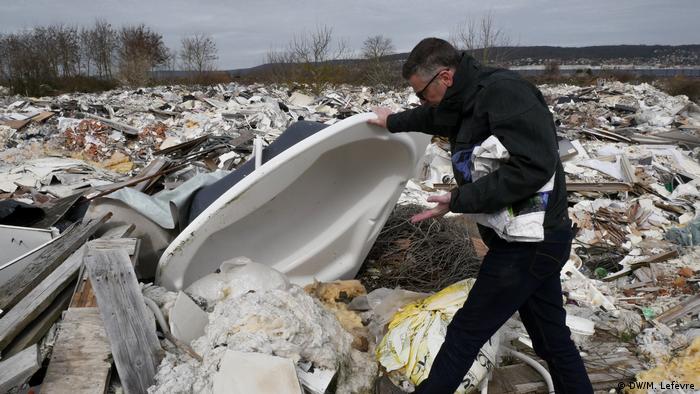 A strong wind ruffles Alban Bernard's short, gray hair as he strolls along what looks like an unspoiled path a couple of hundred meters from the town of Carrieres-sous-Poissy.

But it's not quite as bucolic as it seems at first glance. He is, in fact, walking toward what he has dubbed "the sea of waste."

Less than a kilometer away from this Parisian suburb, an estimated 36 tons of trash have been dumped illegally. In some place, the heaps of sofas, glass, shoes, trash bags and other debris in this otherwise empty field reach the height of two men.

Bernard discovered the landfill site while walking his dog in January last year. A resident of Carrieres-sous-Poissy for the past 10 years, it was the first time he'd noticed the waste hidden behind the foliage.

"It was horrifying," he recalled. "I thought I would faint. There was an ocean of waste in front of me, stretching as far as the eye could see."

The issue is believed to have started around 2007 when a group of Roma people moved onto the field. Local authorities and activists claim they started dumping trash for companies looking to cut their waste removal costs.

"And then local entrepreneurs who didn't care about protecting the environment joined in," Christophe Delrieu, the mayor of Carrieres-sous-Poissy, told DW.

In 2017, Delrieu passed a decree that closed the site to vehicles and unauthorized individuals. But by then empty bottles of solvents and pots of paint lay scattered about, their orange logos signaling the hazardous nature of what they contained — their contents seeping in the field's soil.

"There's a problem of responsibility here," said Bernard, gesturing toward a pile of construction rubble. "This field belongs in part to private owners." Part of it also belongs to local authorities, and he blames them for not taking action sooner.

As the largest of dozens of illegal landfills discovered in France to date, Carrieres-sous-Poissy highlights a countrywide problem: It's hard to fight illegal dump sites when people can't even agree who is responsible.

When it comes to establishing responsibility for cleaning up the sites, each case reveals a mishmash of liabilities.

"It's a bit irresponsible, and not really logical," he said, adding that although some companies discard waste "incorrectly" in order to cut costs, the national problem is more due to the question of waste collection centers.

The cost of waste disposal, the distance between entrepreneurs and the centers and the type of waste those places accept all contribute to the problem. Earlier this year, the federation Chatelain belongs to enacted a charter of best practices regarding waste disposal that entrepreneurs can decide to abide by.

Across France, there are no national statistics regarding the type and number of waste collection centers, just some regional summaries. There are no countrywide statistics about illegal landfills either.

But last year, the French Environment and Energy Management Agency, ADEME, took up the issue, sending a questionnaire to town authorities across the country. Almost 3,000 answered.

Taking out the trash in Nairobi

The findings aren't "exhaustive," said Christophe Marquet, one of the agency's engineers in charge of dealing with illegal wastelands.

He believes "some answers show that penalties aren't off-putting enough," adding that a draft environmental law currently under discussion in Parliament might help tackle this problem.

Fines for illegally dumping waste range from €38 euros ($42) for tossing a cigarette butt on the ground to €75,000 ($83,663) and two years in prison for bigger offenders. Entrepreneurs using professional vehicles to dump their trash would fall into the latter category.

But transgressors are rarely fined, because they are rarely caught red-handed.

In Carrieres-sous-Poissy, Bernard decided to take matters into his own hands. He created a collaborative map where people can add any illegal wastelands they find across the country.

As of April 2019, there were almost 100 illegal landfills on the map. He recently launched an app to make the process easier. 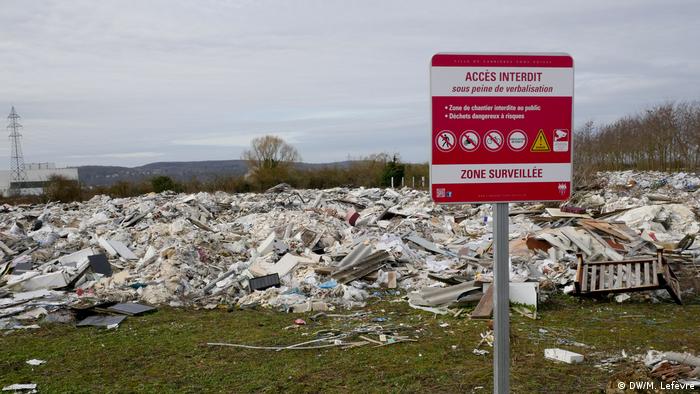 In Carrieres-sous-Poissy, an estimated 36 tons of trash have been dumped illegally

According to French law, companies that generate waste are accountable for its disposal. But without any way to enforce this, local authorities are left to oversee waste collection centers and combat illegal wastelands.

Worldwide associations like World Cleanup Day, which was created in Estonia to fight against waste pollution, help organize local cleanup initiatives. In September 2018, its French branch joined with the mayor of Carrieres-sous-Poissy and locals, including Bernard, to clean a small part of the "sea of waste" in a symbolic operation.

"We try to speak with everyone, from individuals to associations to companies," Anna Gril, the French representative of World Cleanup Day, told DW. Fighting against waste, she said, requires a "global approach."

So far, the Paris region has devoted €5.4 million to battling illegal wastelands. Startups like Ecodrop that help entrepreneurs take care of their waste and optimize the costs of waste disposal are flourishing across the country.

Local initiatives using hidden cameras to collect evidence against polluters have also emerged — as seen in this video from Carrieres-sous-Poissy — but they are still at the experimental stage.

Yet 36 tons of trash still lie in the "sea of waste" and authorities need €3 million to clean it up. While they wait for that to happen, inhabitants are becoming increasingly worried about the unassessed impacts on both their health and that of the environment.

Waste food and emissions: Landfill or the plate?

Millions of people in South Africa don't know where their next meal will come from. Meanwhile, much food ends up in the garbage, and ultimately causes climate-harmful emissions. WWF wants to tackle both problems at once. (11.12.2018)

Thousands of people held a rally in the small Russian town of Volokolamsk to demand the closure of a local landfill that has been leaking noxious fumes into the air. Hundreds of children had required medical assistance. (01.04.2018)