Fighting Racism in the Soccer Stadium 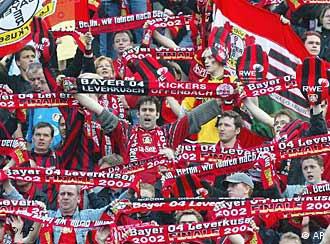 Neo-Nazis often use games to recruit among fans

Mixed in with the chants of thousands of other fans, the racist songs aren’t always easy to hear.

But their lyrics inevitably make their way down to the players on Europe’s professional soccer fields and the reporters covering the games -- leading to major public embarrassment and problems for club owners and soccer officials.

Following several high-profile incidents last year, European soccer’s governing body, UEFA, called a first-ever meeting in London on Wednesday to map out ways to battle the problem. UEFA representatives met with soccer team officials from almost 30 leagues and more than 50 fan clubs. They agreed to adopt a “Good Practice Guide” that would offer advice to leagues eager to root out racist activity in their fan clubs. Possible options include refusing licenses to teams that don’t do enough to combat racism in their stadiums, said Kurt Wachter, of the European anti-racism organization FARE.

"I think it was an abolute success," Wachter told DW-WORLD. "I think ... the discussion process gave you the feeling that you were at the start of something."

Conference participants could also draw on the experience of England, among the most progressive soccer countries in dealing with the problem.

“We can certainly learn a lot from England,” Gerd Dombowski, co-author of “Crime Scene: Stadium,” a book documenting fan violence and racism in German soccer. “The English media are more sensitized to the problem, as are the teams.”

That sensitivity is lacking in Germany, said Dombowski, where many soccer teams have active neo-Nazi fan blocs who use game time to build contacts and recruit new members. Those same fans shower foreign players with chanted racist slurs and songs, and display neo-Nazi symbols on banners and posters.

“In eastern Germany, (the Nazi element) is more open,” Dombowski said in an interview with DW-WORLD. “In the west, it has gotten more subtle, more hidden. They use codes and new symbols instead of the swastika.”

Replacing the jungle calls that once greeted players from the African continent are numbers like “88.” The number 8 being the numerical equivalent of the letter ”H," and "88" being skinhead code for "Heil Hitler."

Some teams, like the Hanover 96 club, have taken action against the codes and symbols, banning them from their stadiums. Teams in four German leagues, including the top flight Bundesliga, have also adopted a 10 point anti-racist plan fashioned by the German Soccer Association.

Dombowski said the first step that many teams should take is to acknowledge that they have radical fan blocs. But he said it was a step that many were still unwilling to take.

“I have a drawer full of resolutions (by teams), and not many have been implemented,” said Dombowski, who is active in BAFF, the Germany-wide organization against racism in soccer.

The initiative is often left up to fans frustrated by the tasteless songs and catcalls of others in the stadium. Johannes Stender started FCK Fans Against Racism for his hometown club FC Kaiserslautern after hearing fans ridicule opposing players as “gypsies.”

"It wasn’t an option for me to stop going to the games,” said Stender, who has been going to games for 22 years. “So I decided to take a stand against racism.”

Using his Web site, he brings like-minded fans together and posts reports from fans who witness racist behavior. Visitors are invited to sign a petition against racism.

Such grassroots initiatives need more encouragement and support from clubs, said Dombowski. With Germany set to hold the World Cup in 2006, everyone from Europe’s top soccer officials to people like Stender need to cooperate more to avoid an international embarassment.

”We can’t ban racism from soccer because it’s a problem of society,” said Dombowski. “The best we can do is recognize that it exists and that it continues to crop up.”