Medical experts place great emphasis on antiretroviral treatment in the fight against HIV. But the drugs, which can be quite costly, are not available to everyone - even though they can limit the spread of the virus. 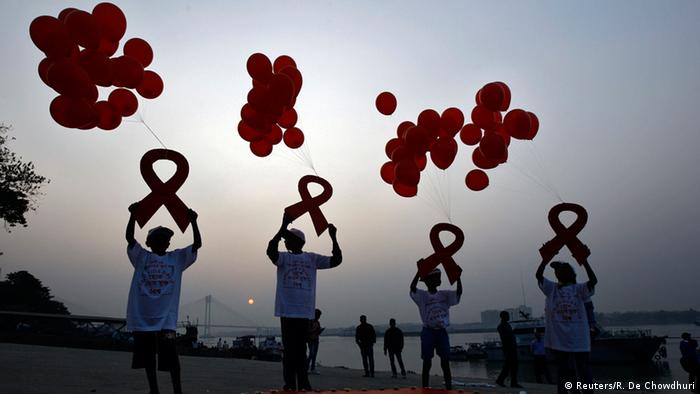 An HIV diagnosis is not a death sentence anymore. With the right medication, patients can expect to live almost as long as anyone without the infection. On World Aids Day, the World Health Organization (WHO) will launch a report with detailed information about antiretroviral treatment, which they say everyone with HIV should have access to.

"There's a whole range of medicine that help treat HIV infections," Gottfried Hirnschall, director of the WHO's HIV/AIDS department, told DW. "The drugs suppress the virus in body fluids. And they're successfully used all over the world."

The positive effect of the antiretroviral (ART) drugs is two-fold. Treatment brings down the viral count in patients to almost zero and keeps HIV-positive people healthy. Their sexual partners benefit from this as well.

"People that receive treatment can achieve suppressed viral load, which makes them non-infective anymore," Philipp Frisch, medication expert with Doctors Without Borders, told DW. "If we now invest in this kind of scaling up and treatment, then we have a chance to prevent new infections." 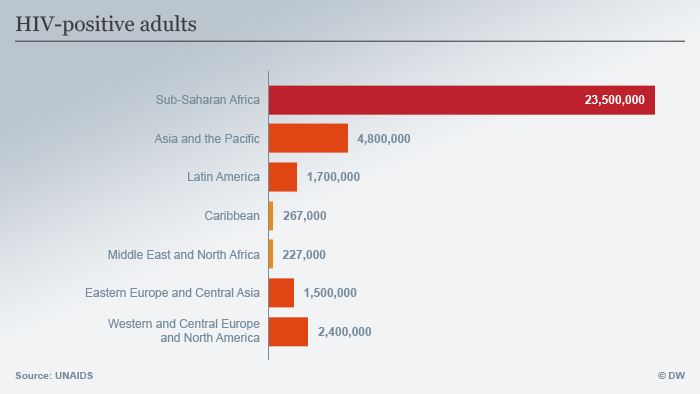 There are currently 37 million HIV-positive people in the world, according to the WHO. Most of them live in sub-Saharan Africa. That still seems like a huge number, but it has in fact decreased over the past 15 years. Frisch calls it "quite the improvement."

The world has taken a big step forward, not just in terms of decreasing the number of new infections, but also when it comes to providing access to the life-prolonging ART drugs.

ART treatment is a big player in the WHO's goal to end AIDS as a public health problem by 2030, Hirnschall explains. But for that, more patients need to take the drugs - and fast. The sooner an HIV-positive person starts ART treatment after diagnosis, the better it can work.

…but there is still a long way to go

For that, the drugs need to be available in the first place. Sixteen million people having access is good, but the WHO wants everyone who is eligible to be provided with ART treatment.

Per country, the percentage of HIV-patients who take the drugs varies greatly, from just 17 percent in the Democratic Republic of Congo, to 96 percent in Great Britain. 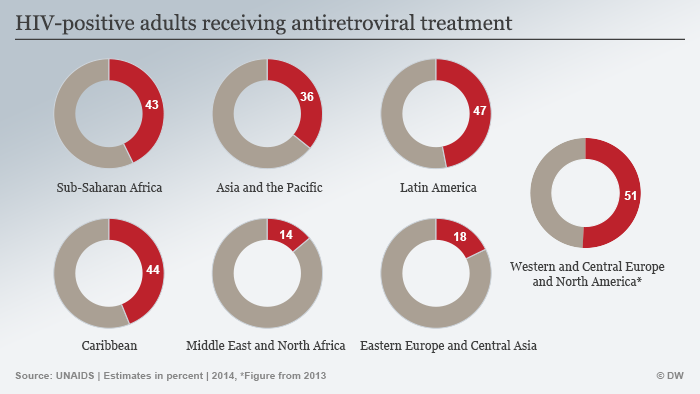 One issue is pricing. Some of the new ART drugs are too expensive for patients in the low-income bracket, no matter where they live.

"We see a global and very worrying trend of strengthening intellectual property rights like patents, which then in turn create monopolies, which keeps the prices very, very high," Frisch said.

He believes that policy needs to change, so that cheaper generics can be distributed more easily.

In Eastern Europe, as well as in North Africa and the Middle East, the percentage of HIV-positive people in ART treatment is especially low. Hirnschall says that is because in these regions, those most affected by HIV are so-called "key populations," like men having sex with other men - and these groups are ostracized in society anyway, even without HIV playing into the equation.

"Services just aren't made available to them," the WHO expert said.

He went on to explain that the Western Europe - North America value being at "only" 51 percent is in no small part due to problems in the US. 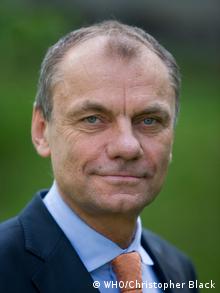 Hirnschall: Over the past five years, we have doubled the number of people in treatment

"In many parts of the US, ART treatment is not available," or patients can't afford it because of health insurance issues, Hirnschall explained.

Ideally, everyone who is HIV-positive would also have access to antiretroviral drugs and take them consistently. But in the real world, not all people with HIV even know they have contracted the virus. WHO has come up with the 90-90-90 goal as a realistic way to fight HIV/AIDS.

That requires funding, of course, and getting the word out about the treatment and its importance in all corners of the world.

"If we keep on doing business as usual, those targets will not be achieved," Philipp Frisch from Doctors Without Borders said. " That's also what makes them ambitious, though - they require additional investment and additional resources."

These resources can only be raised if donors still care enough about HIV-AIDS in our disaster-ridden world 10 years from now.

"I really wish that the interest in ending AIDS won't go away because of other priorities," Hirnschall concludes.

Pope Francis has dismissed a question about condoning condoms in the fight against AIDS, saying that the world is facing bigger issues. The pope left Africa after visiting Kenya, Uganda and the Central African Republic. (30.11.2015)

Despite positive global trends, has said it needs access to twice as much HIV medication to fight the virus. New infections are still on the rise in many regions, with sub-Saharan Africa particularly blighted. (24.11.2015)