When Israel's army withdrew from Gaza in 2005, many hoped that peace would follow. Ten years on, some say the move was a mistake, while others are asking if the occupation, as defined by international law, ever ended. 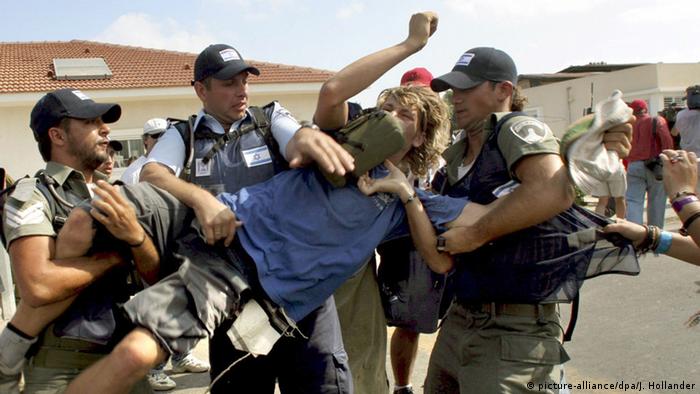 On August 15, 2005, emotional images of Israeli soldiers made their way around the world as the army forced settlers out of their homes in the Gaza Strip. By the end, Israeli forces had cleared military posts and 21 settlements.

The pullout was supposed to bring peace. Ariel Sharon, the prime minister at the time, promised that the country would be safer if Israelis left Gaza, which it had occupied since 1967.

At the time, missiles were frequently being launched at targets in Israel from the Gaza Strip. And the government in Jerusalem wanted to respond to growing international pressure for a solution to the Middle East conflict with its own initiative.

Sharon forced his Likud party to accept the withdrawal despite considerable resistance. At the time, tens of thousands of Israelis protested the plan.

In the end, about 9,000 Israelis were forced to leave their settlements. The army then destroyed most of the buildings. The government promised to provide thorough compensation.

Israelis no longer live on the small coastal strip of land. But militant Palestinian groups continue to launch grenades and missiles at targets in Israel, to which the army responds with attacks from the air.

Since 2005, the conflict has escalated into a state of war four times. In 2014, more than 2,000 Palestinians, the vast majority of them civilians, and 73 Israelis, all but six of them soldiers, died in the violence. Israeli bombs have destroyed thousands of homes and large parts of infrastructure in the Gaza Strip. Although Israel has tight border controls, the Hamas organization, which rules the Palestinian territory, continues to build up its weapons arsenal. Missiles launched by Hamas are now capable of reaching Tel Aviv.

Hong Kong of the Middle East

Now, there is a commonly held view in Israel that the withdrawal was a mistake. Prime Minister Benjamin Netanyahu, who stepped down from his post as finance minister to protest Sharon's plan in 2005, has said this many times.

Opposition leader Isaac Herzog also said that the withdrawal was "undoubtedly a mistake": "Our assumption that Gaza would become the Hong Kong of the Middle East after the pullout was wrong."

According to a survey by the Begin-Sadat Center of Strategic Studies, 63 percent of Israelis think the decision made in 2005 was wrong. "The gap between the hopes and the results is very wide," said Shmuel Even, a researcher at the Institute for National Security Studies in Tel Aviv. Like many others, he says the evacuation 10 years ago sowed the seeds for further problems. "It contributed to Hamas' assuming more power in the Gaza Strip, a significant increase in weapons smuggling, an increase in terrorism and, in turn, the cycle of violence."

For the 1.8 million people living in the Gaza Strip, there's also little reason to celebrate. Their daily lives are plagued by poverty, unemployment and frequent battles between militant groups and the Israeli army.

Ten years after the settlements were cleared, there is still controversy over whether Israel's occupation has even ended. The lawyer Raji Sourani, of the Palestinian Center for Human Rights, told the Washington Post newspaper that Gaza is still occupied, and says the United Nations supports this view.

Sourani argues that Israel still effectively controls significant aspects of life in the Gaza Strip as its blockade massively restricts travel and the import and export of goods. For a long time, Palestinians also had difficulties at the border with Egypt because the government in Cairo is also against Hamas.

Israel Ziv, the former commander of the Israel Defense Forces in the Gaza Strip, dismisses Sourani's view. "Of course Israel does not still occupy Gaza, at least no more than the Egyptians are occupying Gaza," he told The Washington Post.

When Sharon pulled out settlers and soldiers in 2005, Israel was acting alone. There was no agreement with the Palestinian Authority. Now, one can only wonder how things might have been different if the withdrawal had been presented as a common initiative.

The continuing violence has overshadowed any consideration of a possible evacuation from settlements in the West Bank. According to the security expert Even, it only makes sense to hand back occupied territory in accordance with a political agreement. Should such an agreement ever come to fruition, the retired army general recommends handing over the settlements intact, and not destroying them, as was the case in the Gaza Strip.

Archbishop of Paris resigns over 'ambiguous' relationship with a woman