FIFA's Ethics Committee has banned Joseph Blatter and Michel Platini for eight years. They have also been fined 50,000 and 80,000 Swiss francs respectively. 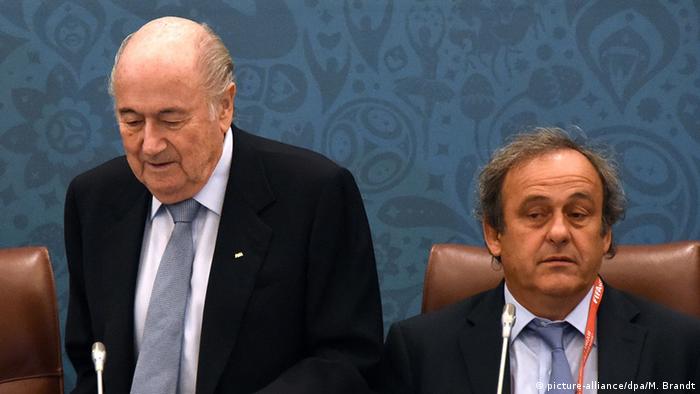 A statement released on Monday by the adjudicatory chamber of the Ethics Committee, chaired by German judge Hans Joachim Eckert, said that it had banned Joseph Blatter and Michel Platini from "all football-related activities (administrative, sports or any other) on a national and international level" for a period of eight years.

It said it had handed down the ruling as it was not convinced by FIFA President Blatter's assertion that he had had an oral agreement with Platini regarding a payment made for services rendered to football's world governing body.

"Neither in his written statement nor in his personal hearing was Mr Blatter able to demonstrate another legal basis for this payment. His assertion of an oral agreement was determined as not convincing and was rejected by the chamber," the statement said.

The payment referred to is one of 2 million Swiss francs (1.85 million euros, $2 million) made by Blatter to Platini in 2011. Both have denied any wrongdoing and said the payment was for work Platini has done around a decade earlier. The payment is also the subject of a Swiss criminal investigation.

The statement went on to explain that "the conduct of Mr Blatter towards Mr Platini without a legal basis constituted a breach of article 20 paragraph 1 of the FCE (Offering and accepting gifts and other benefits). Furthermore, Mr Blatter found himself in a situation of conflict of interest, despite which he continued to perform his related duties, failing to disclose said situation and the existence of personal interests linked to his prospective activities".

While Blatter, who has been serving a provisional 90-day ban handed down by FIFA, did appear before the adjudicatory chamber last Thursday to argue that he was innocent, Platini, the president of Europe's governing body, UEFA, refused to attend his hearing in protest against his 90-day ban. 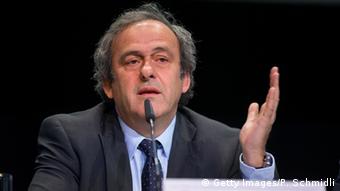 Platini was once seen as the favorite to succeed Blatter

As for Platini, the adjudicatory chamber found that his conduct "without a legal basis constituted a breach of article 20 paragraph 1 of the FCE (Offering and accepting gifts and other benefits). Furthermore, Mr Platini found himself in a situation of conflict of interest, despite which he continued to perform his related duties, failing to disclose said situation and the existence of personal interests linked to his prospective activities."

If upheld, Platini's ban would put an end to his hope of succeeding Blatter as FIFA president at an extraordinary congress in Zurich on Feburary 26. Even before Monday's verdicts were handed down, both Blatter and Platini had said they would appeal any bans imposed upon them.

Until the Ethics Commitee handed down the 90-day bans on both men, Platini, who is also a FIFA vice president, had been seen as the favorite to succeed Blatter. However, due to his ban from all football-related activities, he has been unable to register as a presidential candidate. He had hoped to do so either after his 90-day ban expired or by getting it lifted. However, his appeals were turned down by both FIFA and the Court of Arbitration for Sports (CAS) in Lausanne.