The EU's top diplomat has been honored in Bonn for her contributions to democracy and peace around the world. EU parliament chief Martin Schulz said the award sent an "important message at the right time." 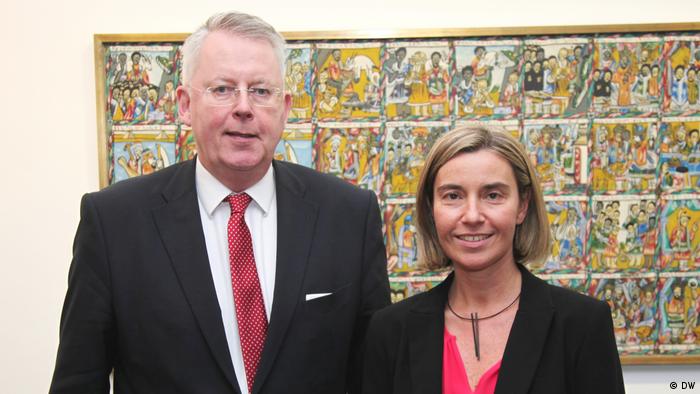 The prize ceremony took place at the town hall in the former West German capital of Bonn on Friday. Addressing the audience, the head of the society which awards the International Democracy Prize, Jürgen Müller, said that Federica Mogherini had given the EU "a strong voice in world politics." Her approach - both sensitive and at the same time assertive - helped her in communicating European values to the world and to countries neighboring the bloc, Müller said.

Mogherini's contributions towards reaching a nuclear deal with Iran were an important reason why the foundation chose to honor her. Müller also mentioned that she impressed the awards society by her strong support for consolidating democratic structures and the rule of law in discussions on the Ukraine conflict.

Lauding Mogherini's efforts, Martin Schulz, head of the European Parliament said, "Where our life is increasingly characterized by catastrophe, wars, populism and even more often by lies and naked hate, the work of Mrs. Mogherini stands out because of her untiring defense of our European values of peace, democracy, human rights and pluralism in the world."

Schulz added that the foreign policy chief had succeeded in bringing EU member states closer to each other and that at a time when Europe "could not hide behind its big brother, the USA."

Speaking to DW after receiving the award, Mogherini mentioned US president-elect Donald Trump's recent election. She stressed the importance of cooperation with the US, saying it was in both parties' interest to work together. "But it might be that his policy priorities will lead America far away from some of the European basic principles," she said.

She also addressed Trump's indications of stronger ties with Russia, saying the EU's policy on Ukraine "is not determined in Washington" and the bloc would continue to consider the annexation of Crimea illegal. She also applauded the Obama administration for constructive discussions in the last years.

Europe's top diplomat also announced plans for Europe's security and defense, saying it wasn't about creating an army, but a European defense and security system that worked. She would present concrete plans with EU ministers on Monday to that end.

The International Democracy Prize was launched in 2009 and is awarded to persons or organizations who have contributed towards human rights and democratic values. Mogherini is the fifth recipient of the award. Others include former Czech President Vaclav Havel, Irani human rights lawyer Shirin Ebadi and the organization Reporters Without Borders.