Under blue skies at Roland Garros stadium in Paris, Roger Federer entered the history books with a convincing win over Sweden's Robin Soederling. 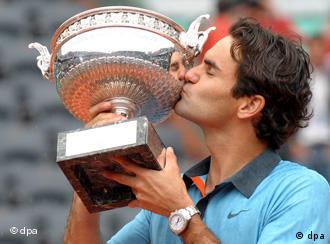 “It's nice to stand on the podium as a winner for a change” said Federer.

The Swiss tennis champion overpowered the Swede from the start, breaking him twice in the first ten minutes of the match. Another break closed the deal, 6-1 for the Swiss after just 23 minutes.

The second set, however, was a tighter affair, with both players holding their serve until the tie-breaker. But Federer is the master of tiebreaks, and he confidently raced away with a 2-0 set lead.

When Federer started the third set with another break, all hope was gone for Söderling.

Federer won the match with a service winner and sank to his knees in tears after two hours of dream tennis. Söderling managed to keep up at times, but the outcome was clear since the beginning of the match.

At the post-match ceremony, it was Andre Agassi who handed over the trophy to Federer. Ten years ago, Agassi completed his own career Grand Slam after winning the French Open.

Federer has now officially become the sixth man to win all four majors at least once.

Now the Swiss Maestro will try to extend the record by winning Wimbledon next month.

Jenson Button won the Turkish Grand Prix for his sixth victory in seven Formula One races. Germany's Sebastian Vettel started from pole position but only came in third. (07.06.2009)

Fans of the Dutch national soccer team can book their tickets for South Africa now. The team from the Netherlands is the first from Europe to qualify for next year's World Cup. (07.06.2009)