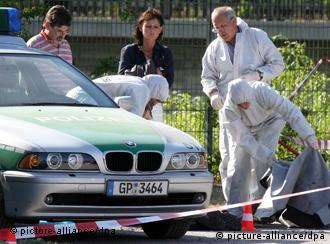 The policewoman's murder has so far gone unsolved

Police had been investigating the scene of fires that destroyed a motor home in the eastern city of Eisenach and an apartment in Zwickau. In the motor home, the bodies of two men were found, apparent victims of suicide after a botched bank robbery. In the ruins of the apartment fire, police also found guns that were used in the killing of the police woman as well as eight food vendors with foreign backgrounds dating back to 2000.

DVDs found at the scene of the fire were also revealed to contain propaganda for a group known as the "National Socialist Underground."

"There is sufficient evidence to attribute the murders to an extreme right-wing group," said a statement from the Federal Prosecutors Office.

This means the investigation into the murders would be treated as acts of terrorism and would be investigated at the federal level. Of the eight murdered food vendors, seven were of Turkish origin and one was Greek. The DVDs found in the burned apartment also contained details about the murders, which occurred between 2000 and 2006.

A case has now been opened against a suspected third accomplice. Beate Z., 36, turned herself into police this week after setting fire to the apartment she shared with the two men, Uwe B. and Uwe M., in Zwickau.

"We have opened an investigation into suspicion of membership of a terrorist organization as well as murder and attempted murder against the Zwickau arsonist," said Germany's acting chief federal prosecutor, Rainer Griesbaum, in an interview on public television.

All three suspects were investigated in 1998 by police after a large stash of weapons was found in their garage. They fled, and the authorities stopped their hunt for them in 2003, since the statute of limitations meant that their alleged weapons offenses could no longer be prosecuted.

The investigation into Michele K.'s murder hit a snag because of tainted DNA samples

The idea that the murders could be traced back to far right groups is unsettling in Germany, a country that around 3 million Turks call home.

"This would be a new dimension in the brutality of neo-Nazis," said statement from the state interior ministry of Bavaria, where five murders took place.

Ralf Jäger, the interior minister of North Rhine Westphalia, also expressed his worry: "Extreme rightists have turned into terrorists. We have to do something about the fact that these perpetrators could operate underground in Germany for years on end."

The latest developments bring new light to the previously unsolved murders. In the case of the murdered policewoman, who was shot in the head in Heilbronn in 2007 along with her partner, who was severely injured but survived, it could bring a sense of closure to what has been a frustrating investigation.

DNA tests of evidence found at the shooting led to a highly publicized hunt for a genetic footprint that had also been identified at other crime scenes, but it turned out a woman at the company conducting the tests had contaminated the samples.

The service weapon of Michele K., the murdered policewoman, and her partner were also found in the ruins of the apartment fire in Zwickau.

In 2007, a policewoman was murdered in the southern German town of Heilbronn. The investigation faltered and was botched by authorities. Now, the state's top prosecutor believes the culprits have been identified. (09.11.2011)

DNA traces of an unknown woman have been found at crime scenes spanning 16 years. Police admitted on Thursday that they were chasing a phantom killer when swab sticks used for testing were found to be contaminated. (26.03.2009)