Federal prosecutors in Germany have taken over the investigation into a failed bomb plot at the Bonn central station. They say the incident was likely an attempt by an Islamist organization to commit an act of terror. 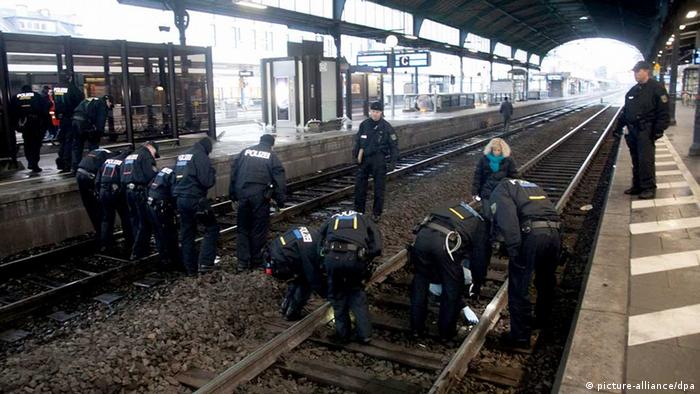 The announcement on Friday from the German federal public prosecutors' office in Karlsruhe confirms that Monday's bomb scare is being treated as an attempted terror attack, bringing the investigation under federal jurisdiction. The investigation was previously being led by district prosecutors in Bonn.

A statement released by the prosecutor's office on Friday said that there were "plenty of leads indicating the events were an attempt at a bomb attack by a terrorist organization with radical Islamist influences."

The prosecutor's office said it would utilize the Federal Criminal Police Agency (BKA) to conduct the investigation and that the BKA would create a special structural organization to that end.

In a recap of the facts in the case so far, the prosecutor's office said that a man left a sports bag on one of the platforms at the main train station in Bonn early in the afternoon on Monday. The bag contained a prepared explosive device. An initial investigation of the device revealed it consisted of a metal pipe approximately 40 cm (15.7 inches) long that contained ammonium nitrate. Compressed gas cartridges were wrapped around the pipe, as were a timer and batteries meant to serve as an ignition device.

Regarding the suspect, prosecutors said there were "credible indications that the suspect was connected to radical Islamist groups" and was therefore being sought for "attempting to carry out an explosive attack as a member of a terrorist organization."

An investigation is still ongoing as to why the device did not explode. Citing the ongoing investigation, no further details were released.

Earlier this week, police released a computer-generated composite picture of a suspect based on the description by a 14-year-old eyewitness. The picture - which was on display in public places all over Bonn - shows a tall, thin, dark-skinned man between the ages of 30 and 35.

Video footage used in the initial investigation showed a light-skinned man carrying a bag similar to the one found with an explosive device, Cologne Chief of Police Wolfgang Albers said earlier this week.

According to the local Bonn General Anzeiger newspaper, the video footage was taken from a security camera at a McDonald's on the train platform as all of the station's cameras were out of order on Monday.

Several police officers who were seized by anti-France demonstrators from radical Islamist group TLP have been freed. Protesters want the French ambassador to the country expelled in an ongoing dispute over blasphemy.

Authorities searched dozens of homes across Austria and questioned people with suspected ties to the Muslim Brotherhood and Hamas. Officials said the raids had "no connection" with the recent deadly attack in Vienna.