A federal judge has sided with a transgender Virginia student, who claimed that a school board violated his rights. The school was found to have stigmatized Gavin Grimm by banning him from using the boy's bathroom. 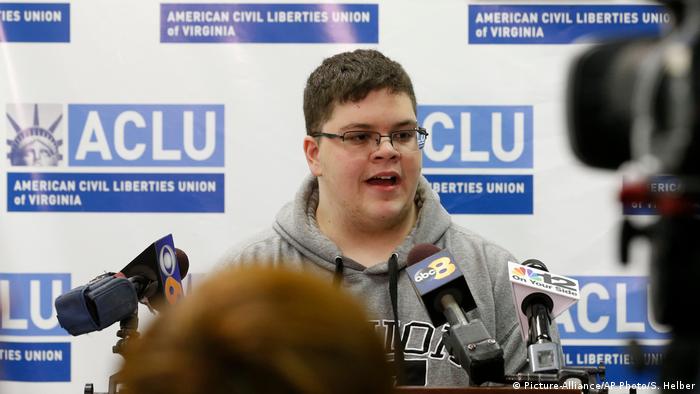 Transgender student Gavin Grimm defeated the board of his old high school before a federal court on Tuesday over the right to use the bathroom corresponding with his gender identity.

US District Judge Arenda Wright Allen in Norfolk rejected a bid by the Gloucester County School Board to dismiss the civil rights lawsuit filed by Grimm.

The judge found that Grimm had valid claims under a federal law, called Title IX of the Education Amendments of 1972. The law bars discrimination on the basis of sex in education.

"Preventing Mr. Grimm from using the boys' restrooms did nothing to protect the privacy rights of other students, but certainly singled out and stigmatized Mr. Grimm," the judge said.

Joshua Block, an attorney from the American Civil Liberties Union (ACLU) representing Grimm, said the victim was seeking nominal damages from the school board, along with an admission that its bathroom policy was illegal.

Grimm, age 19, was born a girl, but identifies as male. Grimm filed the suit back in 2015 before taking the case all the way to the Supreme Court. He graduated from the high school in question last year and continued to pursue the case against them.

Bathroom access has gone on to become a major issue in the battle over transgender rights.

"I feel an incredible sense of relief,"Grimm said in a statement. "After fighting this policy since I was 15 years old, I finally have a court decision saying that what the Gloucester County School Board did to me was wrong and it was against the law."

The case between Grimm and the school board went on to reach the Supreme Court in 2015, although in that instance a federal judge sided with the school board. However, an appeals court went on to rule in Grimm's favor, citing a directive issued by President Barack Obama's administration ordering all public schools nationwide to allow transgender kids to pick the bathroom of their choosing.

However, the subsequent White House administration under Donald Trump has since gone on to rescind the guidance.That caused the Supreme Court to back out of once again hearing the case and send it to the lower District Court in Norfolk.

A month after announcing a move to ban transgender troops, US President Donald Trump has ordered the military to comply. His decision has caused distress to thousands of trans army personnel already serving. (26.08.2017)