Federal court rules against Muslim prayer in Berlin high school | Germany| News and in-depth reporting from Berlin and beyond | DW | 30.11.2011

A federal court overturned a ruling that allowed a Muslim student to perform his daily prayer on school grounds during his break from class. The student can now take his case to Germany's Federal Constitutional Court. 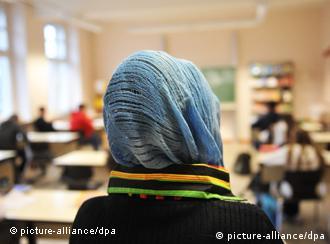 A federal court in Leipzig ruled on appeal Wednesday that a Muslim student's religious freedom to pray should be restricted during school hours in order to preserve "peace" at his Berlin high school where many different religions are represented.

In 2007, the student Yunus M. sued his high school in the Berlin neighborhood of Wedding after the principal forbade him from praying on his knees in the school hallway. The highest court in the region Berlin-Brandenburg had ruled in 2009 that the now 18-year-old Yunus had the right to pray on school grounds during his break from class. His high school subsequently granted him a special room for midday prayer, one of the five required daily prayers in Islam.

But the state of Berlin appealed the ruling out of concern that daily prayer would disturb the high school's routine and jeopardize its religious neutrality. Although the federal court in Leipzig overturned the original confirmation of M.'s religious rights, it said the ruling was based on an individual case and that the state normally has to allow religious freedom in schools.

Because the case concerns fundamental civil rights, the court permitted Yunus M. to lodge an appeal in the Constitutional Court. M.'s lawyer said they would wait until they had seen the written judgment.

Court to rule on Muslim prayer in German schools

On Wednesday, Germany's Federal Administrative Court is set to rule on whether German schools must accommodate Muslims by providing them with a place to pray. (30.11.2011)

In many German cities, Muslim arbiters, or "peace judges," are settling criminal cases before law enforcement can bring the cases to court. That is undermining Germany's rule of law, according to a new book. (31.08.2011)

They are ambitious, well-educated and jobless. In Germany, a rising number of skilled Muslims are complaining of discrimination. Women wearing a headscarf feel especially excluded from the job market. (10.07.2011)