Fear of FPÖ driving Austria to the right? 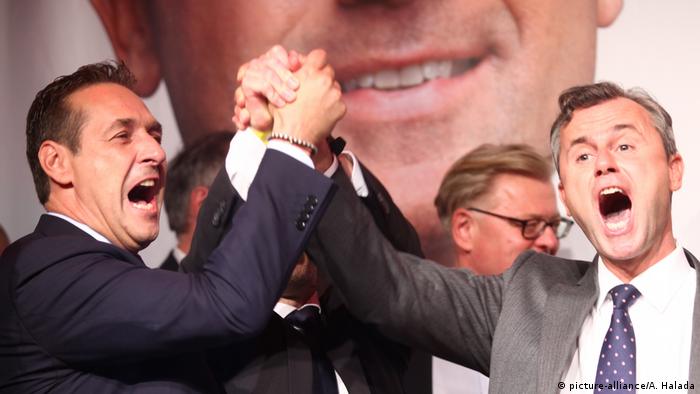 Austria's ruling coalition wants to implement a law which will let authorities stop providing food and accommodation to refugees whose asylum claims have been rejected. The UN has criticized the initiative. (28.02.2017)

Far-right Austrian politician Heinz-Christian Strache has slammed Islam as "fascistic." And he upped a call by his party's coalition partner, which wants to halve asylum applications, by calling for no migration at all. (14.01.2017)

Leaders of Austria's ruling coalition have narrowly averted the risk of a government collapse after reaching an agreement on a number of policy objectives. The reforms include the introduction of minimum wage packages. (30.01.2017)

Austrian Foreign Minister Sebastian Kurz called for reforming the EU on Wednesday, urging better border security and slamming the bloc as "too weak" on major issues.

"People have a right to be upset if the EU is too weak to protect its borders, but still forces all the restaurants to change their menus over allergy guidelines," Kurz told the Austrian media.

His statement comes a day after Austrian grand coalition proposed a new law on asylum seekers. If the bill passes, the authorities will be able to stop providing food and accommodation to refugees whose asylum applications were rejected.

"The first thing is basically that they don't get anything from the Austrian state if they don't have the right to stay here. Is that so hard to understand?" asked Interior Minister Wolfgang Sobotka.

The bill raised a few eyebrows abroad and drew a rebuke from the UN. Many observers, however, suspect that the tough rhetoric might be a play against the right-wing FPÖ, the populist party which came a hair's width away from winning the presidency last year.

"It all comes a bit too late," Austrian political analyst Helmut Pisecky told DW on Wednesday. "For two years, the government has been dealing with asylum seekers, integration issues, and the refugee influx, and it took them so much time to organize a response."

As in several other EU countries, the confusion over refugees has boosted local anti-immigration parties in Austria. The country is currently ruled by the conservative ÖVP and the left-leaning SPÖ, but the polls put both of them behind the populist FPÖ. Moreover, the notable friction inside the grand coalition might prompt an open split inside the government of Chancellor Christian Kern and lead to an early vote in the coming months.

"Both of the ruling parties are now, somewhat, in campaign mode," says Pisecky, who spent ten years in the Austrian defense ministry before starting work in Austrian Society for Policy Analysis. "We still don't know if there is going to be an early election, the next one is scheduled for 2018, but they try to position themselves and deal with the growing pressure from their opponents. Those opponents include the FPÖ, the party which has made their position on migration very clear."

The FPÖ's focus on migration has been very successful among young Austrians. Many of their voters are men with lower levels of education, who fear that immigrants would flood the labor market. To reach their target group, the FPÖ mounted a modern and effective campaign, with party leader Heinz-Christian Strache appearing in music videos and party representatives promoting the FPÖ in nightclubs.

Hints of coalition with FPÖ 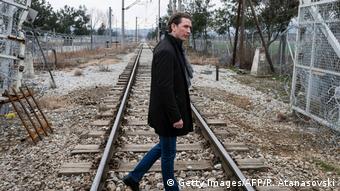 Sebastian Kurz called for setting up refugee camps in Africa

Faced with the FPÖ's rise in the polls, the ruling coalition responded by launching a series of measures to limit immigration, offering funding and personnel to its neighbors to help guard their borders. In December, Foreign Minister Kurz threatened sanctions for countries refusing to take their citizens back from Europe.

At the same time, both of the parties recently seem to signal a more conciliatory attitude towards the right-wing group.

"In November and December last year, there was this impression that both of the ruling parties were carefully extending their feelers towards FPÖ over a possible coalition, but it was never made official," Pisecky told DW. "The question remains: Is this just a strategy to strengthen their negotiating position inside the ruling coalition, or is there a real concrete interest?"

EU 'not capable' of fixing immigration

Austria's biggest neighbor, Germany, plays a significant role in the political strife and the debate on migration. From Vienna's standpoint, Germany's welcoming policy to migrants led to an increased influx across Austria's borders, which put a strain on the traditionally close ties.

According to current polls, an early parliamentary election would see the FPÖ taking most seats in the Austrian parliament and put even the chancellor's office within their reach. Even if the FPÖ stayed in opposition, a reshuffle could leave Berlin with another ally opposing its policies in the EU.

Pisecky also notes that the EU's hesitation to act in the crisis prompted notable conservatives, including Foreign Minister Kurz, to criticize Brussels.

"He has made his position very clear – he said: 'We have been waiting for almost two years for the EU to find a solution for this issue, but that is apparently not happening, because the EU is not capable of it," Pisecky told DW.

"On the other hand, you have Chancellor Kern who insists that the issue can only be solved with a joint, European perspective."

"After a phase of little optimism, a political turning point in Germany is within reach," Kern said in Bavaria.