The absence of a father is one of the reasons why many radicalized German teenagers join fundamentalist groups, says an expert from the Violence Prevention Network in Germany. Mothers, however, can make a difference. 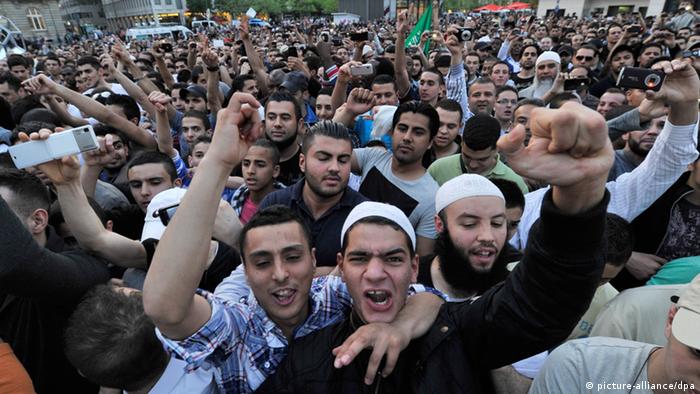 Young men cheer for the Salafist preacher Pierre Vogel, who was holding a speech in the city of Frankfurt am Main in April 2011.

At least 550 German citizens have left their home country to fight for the terror organization Islamic State group in Syria and Iraq, #link:http://www.dw.de/german-intelligence-dozens-of-germans-killed-fighting-for-is/a-18081335:according to Germany's domestic intelligence service#. #link:http://www.quilliamfoundation.org/wp/wp-content/uploads/publications/free/islamic-state-the-changing-face-of-modern-jihadism.pdf:After France and England#, Germany is the country with the third largest amount of Jihadists leaving Europe to join forces with radicals abroad.

Referring to a still unpublished study by the German domestic intelligence service, Germany’s daily #link:http://www.faz.net/aktuell/politik/dschihad-in-deutschland-zieht-arbeitslose-und-straftaeter-an-13287950.html:“Frankfurter Allgemeine Zeitung”# reported that one third of the radicalized Germans who left their home country to fight with Islamist groups in Iraq and Syria were between 21 and 25 years old, while about 50 of them were teenagers.

Why are so many young Germans leaving their home country to join a fundamentalist group? In an interview with Life Links, Thomas Mücke, head of the #link:http://www.violence-prevention-network.de:Violence Prevention Network in Germany#, explains that family plays an important role.

Life Links: Mr. Mücke, you work with young radical Germans to prevent them from joining fundamentalist groups like the Islamic State group. Are there any particular characteristics that these radical youths have in common?

Thomas Mücke: There are definitely common characteristics. In our experience, all of the radical youths come from broken families. The young people that come to us for counseling are lacking a permanent father figure in their lives, which results in them not quite knowing where they belong. They are searching for their identity, for authority and a system with clear rules. A broken family, no father and an identity crisis make them vulnerable to an easy and enticing model that the #link:http://www.dw.de/signpost-project-points-youth-away-from-radical-salafism/a-17276687:neo-salafists# are offering.

You just said that all of the young radicals you work with come from broken families and are missing a father figure. Does that mean young men with absent fathers are more likely to become Jihadis? 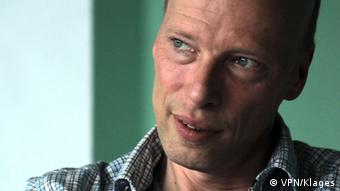 Thomas Mücke is the co-founder of the Violence Prevention Network in Germany (VPN). The organization offers programs to de-radicalize young people in Germany. They are currently counseling about 50 families.

Not all children from fatherless families become Jihadis, but they are at risk of becoming Jihadis, especially when they’re also from a lower-class neighborhood with poor educational and social prospects. The female siblings of Jihadis are often more educated and therefore aren’t as prone to joining a radical group. Especially in migrant families, daughters are doing much better in school than their brothers.

We’ve observed that younger brothers of radicalized young German men follow in their older brothers' footsteps and copy their behavior and ideology. Once a young man decides to leave the country to fight in Syria or Iraq, his younger brothers will most likely try to join him. There are exceptions of course, but this is the majority. What's striking is that their parents are often not fundamentalists themselves and are much more liberal.

It looks like parents and the immediate family members have a great impact on radical youths. But how do parents know if their child is in danger of joining a fundamentalist group?

Parents do recognize the early warning signs, they are pretty obvious. It starts with the child suddenly changing its lifestyle habits, breaking off all of its social contacts. It becomes increasingly hard to get through to the child because the child adopts a rather black and white mentality and watches a lot of extremist videos on the Internet.

Eventually parents notice that their child is not within their reach anymore, it's not emotionally available. At this point most parents start getting desperate and worry what will happen next. They worry that their child might do something extreme. If they feel a lot of pressure they'll contact counseling centers. The parents are really afraid of what’s going to happen and most don't even know whether their child will still be at home when they come back from work.

How do you know whether a teenager is just going through a normal phase or whether there's an actual danger of the child becoming radicalized?

The lines are very blurry as these youngsters become radicalized extremely fast. The problems that trigger a radicalization have often already occurred way back during a teenager's childhood and have never resulted in extremist behavior before, but as soon as the vulnerable teenagers enter a radicalized scene, they adopt a very extremist behavior and mindset in a short amount of time.

Then they often feel like they have to do something for their new peers, there's a social pressure for them to prove themselves by doing something extreme. That’s when the parents quickly realize that this is not a normal phase that can be blamed on puberty but that there's a well-organized extremist scene in the background pushing the child to drift away.

What can family members do to help their child get out of the extremist scene?

It's vital not to abandon the radicalized youngster in a situation like that. It takes years to back out of an extremist scene. So what we do is we support the family and try to strengthen family ties. Especially the mothers play an important emotional role. We often observe that mothers are the only reason why the radicalized youngsters haven't done anything extreme yet.

The mother-child relationship is often the only emotional relationship these kids have outside of the extremist scene. And that's why it is so important not to let the relationship break off because despite the fact that the youngster may have already been radicalized, the relationship with the mother still has an impact, the children still think about the moral values their mothers have taught them. And so what we do is we try to strengthen and stabilize this positive relationship to get the kids back on track.

Thomas Mücke is the co-founder and CEO of the Violence Prevention Network in Germany (VPN). The organization offers programs to de-radicalize young people in Germany. After working with young neo-Nazis, VPN started working with youngsters who have a radical-islamist background in July 2014. Since then, VPN has been working together with parents and children to help these radicalized youngsters find a way back to a self-determined life. They are currently counseling about 50 families.

German intelligence: Dozens of Germans killed fighting for 'IS'