Fighting in the pro-Russian stronghold of Donetsk has led to several deaths, including one in the shelling of a hospital. NATO's secretary general has arrived in Ukraine amid growing fears over a Russian troop build-up. 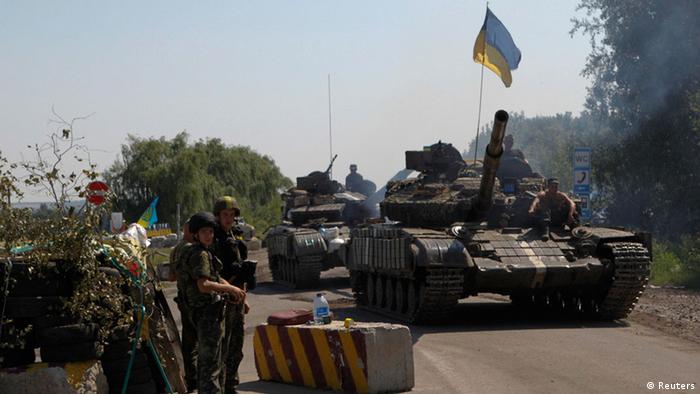 As Ukrainian government forces sought to tighten their grip on the eastern city of Donetsk, medical sources at one of the city's hospitals said the building had been hit by a mortar killing at least one person.

"Today as a result of a mortar shell hitting the... first Donetsk city hospital, one person died and two were injured," said a regional health official.

According to the AP news agency, only the dentistry unit at the hospital - which lies less than three miles (five kilometers) from the central city square - was hit. It remained unclear from where the shelling had come.

"There was a sudden explosion, a mortar round flew through the window, all the equipment was destroyed," Anna Kravtsova, a doctor at the hospital, said.

The incident followed overnight shelling in another central neighborhood, with city officials saying that at least three people were killed and five others wounded.

A Ukrainian military spokesman confirmed that "offensive operations" were under way around Donetsk and also in eastern Ukraine's second largest city of Luhansk. He added that seven soldiers had been killed and 19 injured in 24 hours of fighting.

As the two sides faced each other, NATO on Wednesday expressed concerns about a build-up of some 20,000 Russian troops on the border with Ukraine, warning of a possible advance. A Russian request for a humanitarian mission to Ukraine's eastern regions, which followed a UN report bemoaning the worsening conditions, fueled suspicion that it might be used as a pretext by Moscow to intervene.

In a show of solidarity with Ukrainian leaders, NATO Secretary General Anders Fogh Rasmussen on Thursday arrived in the capital.

Both the EU and US have imposed sanctions on Russia in light of perceived Russian backing for pro-Moscow separatists, as well as the alleged shooting down of Malaysia Airlines Flight MH17 over eastern Ukraine.

Moscow on Thursday reacted to those sanctions by restricting imports of most EU food and agricultural products.

"This announcement is clearly politically motivated," the European Commission said in a statement. "Following full assessment by the Commission of the Russian Federation's measures, we reserve the right to take action as appropriate."

In its statement announcing the year-long sanctions, Moscow said it was also considering a banning European airlines from flying through Russian airspace.