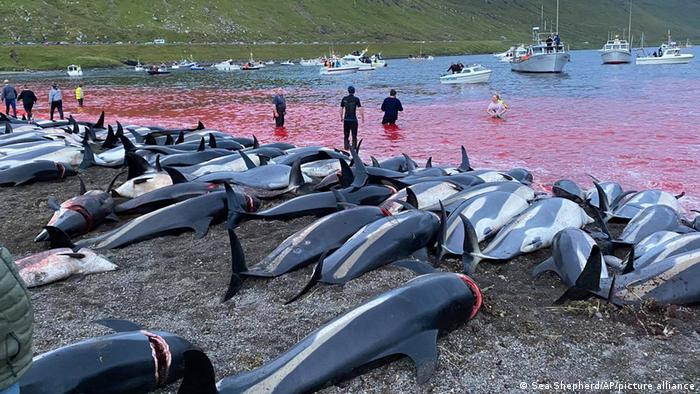 The traditional annual killing of whales and dolphins sparked controversy on Tuesday after it emerged that over 1,400 of the marine animals were killed in this year's event, according to Danish media reports.

The so-called "grindadrap" hunt has been going on for over four hundred years on the small North Atlantic islands that belong to Denmark. But the large number of animals killed on Sunday has raised fears of tarnishing the islands' reputation.

The environmental organization Sea Shepherd posted a long video on Facebook showing the slaughter of the 1,428 white-sided dolphins, calling it the largest group of animals killed in one go on the islands.

The Switzerland-based marine organization OceanCare also criticized the practice, saying "a line has been crossed here and a new dimension of hunting has been reached."

The islanders usually kill up to 1,000 sea mammals each year. Last year, they only killed 35 white-sided dolphins.

Several people involved in the hunting tradition have since distanced themselves from this year's killing, with the former chairman of the Faroese association for pilot whaling telling a local broadcaster that it was excessive.

The foreman of a different group that drives pilot whales toward shore on another island said that he had not known of the large dolphin drive and "strongly dissociated" himself from it.

The islands' Fishery Minister Jacob Vestergaard told the radio broadcaster Kringvarp Foaroya that the dolphin hunt had been done by the book.

Neither pilot whales nor white-sided dolphins are endangered. The hunt usually focuses on the whales rather than the dolphins.

The animals are driven into shallow waters where they are then cut with knives. The killing is regulated by local laws. The meat and blubber from the animals is shared out among the community.