The graves of 90 soldiers, killed in the Falklands War of 1982, remained unidentified until last year. A few still remain interred on the disputed islands in graves marked "Argentine soldier known only to God." 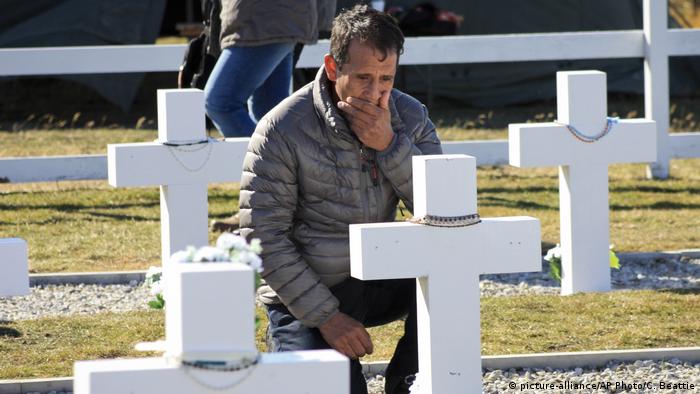 Family members of soldiers killed in the Falklands War paid their tribute at the graves of their loved ones for the first time in 36 years.

The graves of 121 Argentine soldiers in the disputed Falklands Islands, known in Argentina as the Malvinas, had remained unidentified since the war in 1982. But, after DNA testing, the International Committee of the Red Cross was able to name 90 of them last year.

For most of the past 36 years, the plaque on their graves read "Argentine soldier known only to God."

"I found my son, I spoke with him, I asked him questions, I shared my feelings with him, my pain," said Dalal Massad after she and her husband Carlos Massad paid their tribute to their son. "I feel at peace because I know where he is."

The Massads were part of a group of around 250 Argentines who travelled to the islands on Monday. The visit was part of an agreement reached with Britain.

Some 255 British troops and about 650 Argentine soldiers were killed during the two-month war waged by the United Kingdom in 1982 to reclaim the islands from troops deployed by Argentine dictator Leopoldo Galtieri.

Argentina still claims the islands, which it calls the Malvinas. But it signed an agreement with Britain in 2016 to try to identify the soldiers and divide the costs.

"Speaking for the state, I think we have taken an enormous step toward closing a debt we had to the families and to the heroes of the Malvinas," Argentina's human rights secretary, Claudio Avruj, said at the ceremony.

Relatives of fallen soldiers whose graves have not been identified also attended the ceremony on the Falklands, which lie some 300 miles (485 kilometers) off the coast of Patagonia.

"This is not the final step, this is the beginning," said Norma Gomez, whose brother Eduardo was identified. "This process will continue until all the missing soldiers are identified."

The Argentine government has protested against British military drills to be held on the disputed Falkland Islands. The islands have been a source of tension for the two countries over the past several decades. (15.10.2016)

Argentina's Foreign Minister Susana Malcorra has told the UN that recovering sovereignty of the Falkland Islands remained a permanent objective. Malcorra is a candidate to replace Secretary General Ban Ki-moon next year. (24.06.2016)

Argentina: Back to the countryside