TV viewers in Germany watching a popular quiz show were left flummoxed when a news ticker appeared to show the projected results of the German election two days before polls opened. Far-right leaders seized the moment. 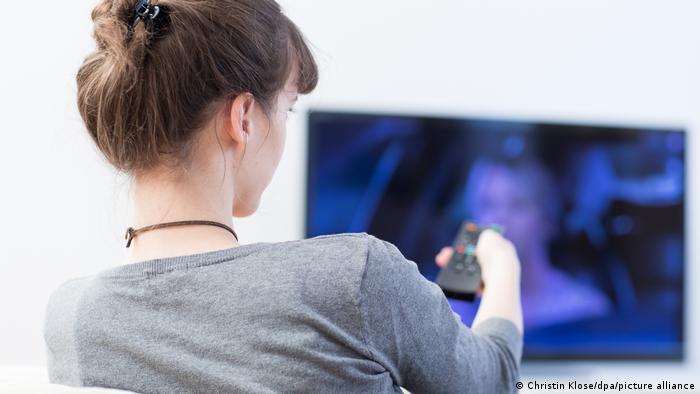 German public broadcaster Das Erste has apologized for "accidentally" airing the "fictitious" projected election results — but the gaffe has since been used to fuel baseless claims of election rigging.

During Friday's broadcast of the quiz program "Gefragt — Gejagt" (Asked — Chased), a news ticker appeared describing the projected election results. Video clips have since circulated on social media that show the ticker, also known as a crawler, appearing for 7 seconds before disappearing from view.

The erroneous ticker listed the center-left Social Democrats as pipping Angela Merkel's conservative party CDU with 22.7% and 22.1% respectively, while the far-right populist Alternative for Germany (AfD) party with 10.5% trailed the political powerhouses  — as well as the neoliberal Free Democratic Party (13.2%). The crawler disappeared before figures for other parties were displayed.

Facebook and Twitter users, including lawmakers and supporters of AfD and apparent bots, had been quick to jump on the baseless suggestion that the incident revealed the broadcaster's intention to rig an election.  "Why was there a mishap? The puppets were told the election results weeks ago — they just happened to fade in too early!" wrote one user. 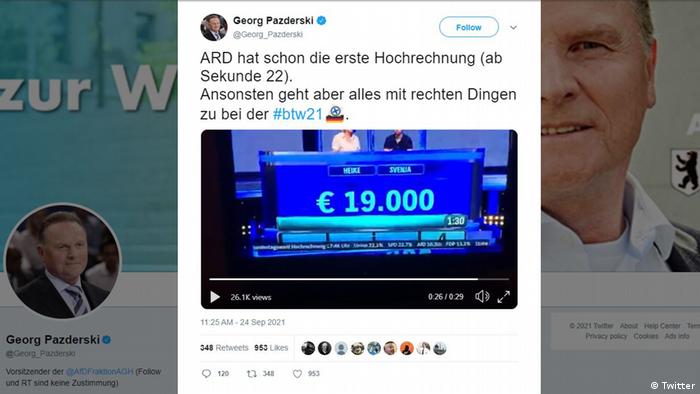 'ARD already has the first projected results (from 22 seconds). Otherwise, everything is going according to the rules at the #BTW21,' wrote Pazderski, in an apparent sarcastic tone. #BTW21 refers to Bundestagswahl 2021, or German election 2021

Berlin state lawmaker Georg Pazderski, who is chairman of the AfD's Berlin faction, shared the clip on Twitter which has been viewed more than 60,000 times. He also shared a screenshot on Facebook showing the headline of the mishap in a digital article from the tabloid Bild, Germany's largest newspaper.

"Embarrassing slip-up by the public broadcasters!" Pazderski began in his Facebook post on Saturday morning, before sharing details of Das Erste's error. He then falsely suggested that ARD, which requires German residents to pay a license fee, knew the election results before polls opened.  "Those who've always doubted the objectivity in the reports on the 'compulsory fee' television see it confirmed once more! They already know today what Germany's citizens will vote for on Sunday! Congratulations on such extraordinary skills!"

Pazderski edited his Facebook post later that day, deleting his opening line about how the mishap was "embarrassing."

He added at the end of the post: "A tip for next time: If a test is necessary, then please mark it as such and don't show fictitious figures, otherwise, it could be seen as deliberate election interference. And we don't want to even think about that."

On Twitter, Bundestag lawmaker Joana Cotar, who is also part of the AfD's federal executive committee, retweeted her colleague's tweet on the blunder and wrote: "But on Sunday you'll have to change the numbers so that it's not so conspicuous …" 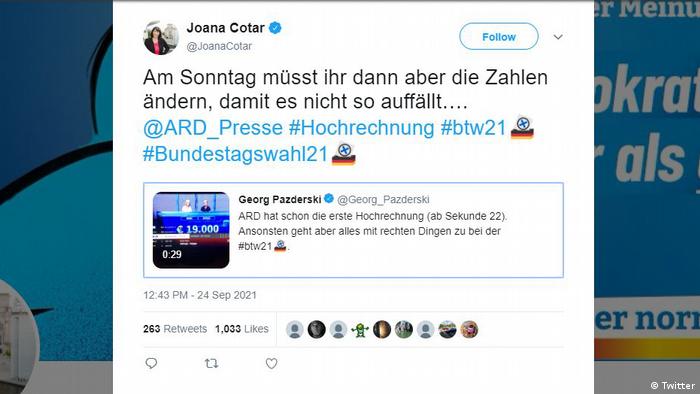 Recent election polls suggest that the AfD, which is the largest opposition party in the Bundestag, struggled to gain momentum ahead of election day — though it is still forecast to rake in a sizable number of seats.

But Das Erste and ARD — an umbrella organization of Germany's regional public broadcasters that work on TV channels like Das Erste — have insisted it was an error during a technical test gone wrong.

"During today's edition of @GefragtGejagt, a ticker with fictitious projected figures was seen for a few seconds. It was a test that accidentally went on air. We apologize for that," read the Das Erste tweet Friday night.

'Technical glitch': What did ARD say?

In a statement to DW, the ARD confirmed that the clip shared by Pazderski on Twitter was indeed broadcast during Friday's episode of "Gefragt — Gejagt."

"It was a technical test of the election crawler by the Central Broadcasting Service (ZSL) in preparation for the election on Sunday and was supposed to be done on an inactive broadcast transmission, but went on air due to a switching error," said the ARD spokesperson.

Many on social media, across various political affiliations, wondered why the public broadcaster did not use filler text for the percentages, such as XX% or 00%. When asked by DW why specific percentages were used, ARD re-emphasized that the numbers were "fictitious."

"Unfortunately, I do not know why the ZSL employee chose concrete numbers. Maybe it was to make it look as realistic as possible in the test," said the ARD spokesperson.

"We apologized on social media for the technical glitch immediately after the broadcast. It was an unfortunate switching error and should in no way affect confidence in the election and its results."

How are the election results determined?

The German election system is a form of proportional representation — and means each voter gets two votes. One is for their local representative to Parliament, or Bundestag, and the other is for a political party, the latter of which determines the strengths of each party in the Bundestag.

The election polling stations open Sunday from 8 a.m. to 6 p.m. Postal ballots must also be received by 6 p.m. Exit polls, carried out by various polling companies and organizations, are published right after the polling stations close — not earlier. To do so earlier would violate German electoral law.

The election projections are revealed once the first ballots have been counted — and are updated as vote tallying continues into the early hours. The provisional results are usually announced by the next morning by the Bundeswahlleiter (Federal Returning Officer), Germany's top official tasked with overseeing the elections.

The unveiling of the official results tends to take several weeks longer. The 2017 election results were released 18 days after polling stations closed.