Facing a Changing Industry, a City Tries to Reinvent Itself | Business | Economy and finance news from a German perspective | DW | 31.01.2006

Facing a Changing Industry, a City Tries to Reinvent Itself

Wolfsburg is a planned city established around a Volkswagen plant in 1938 and has thrived for decades. But as more car manufacturing leaves Germany, the city is trying to wean itself from its dependence on the auto. Wolfsburg is embracing change out of necessity

Wolfsburg is literally the town that VW built. Its origins go back to an industrial colony created to house workers at a new Volkswagen production facility. It was christened with the unwieldy name of "City of the Strength Through Joy Car," the original name of the auto that would later be known as the Volkswagen Beetle.

"Strength Through Joy" was the name of the National Socialist leisure organization.

Although after World War Two the town carried the stigma of its Nazi founders and lay largely in rubble, once the VW conveyor belts began turning again, the town, now renamed Wolfsburg after a 14th-century castle there, began to thrive. 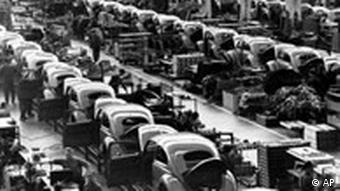 That happy state of affairs lasted for decades. Wages were good, attracting workers from across Germany to this artificial town on the plains between Berlin and Hanover. They got discounts on cars, job security and annual raises. The cozy relationship between VW management, workers' representatives and the state government meant labor unease was almost unheard of.

But those days are over. In the early 1990s, at a time when VW was selling more cars than ever, the company experienced an economic crisis that threatened its existence, and in turn, the fate of the city of Wolfsburg.

"We can only pray" was a comment in the newsmagazine Der Spiegel at the end of 1992 as it revealed that Volkswagen had suffered enormous losses in operative results. VW's debt had jumped to dangerous levels and manufacturing costs had gone through the roof. The bad news was made even worse soon after by a recession that took hold of Germany in 1993.

By this time, the Berlin Wall had fallen, and car manufacturers, including VW, were realizing that production could be done more cheaply in eastern Europe than it could in high-wage Germany. In 1991, it opened production in eastern Europe and today employs more than 41,000 there. According to the Center for Automotive Research (CAR) in Gelsenkirchen, by 2010, more than 50 percent of German auto parts will be produced abroad.

"Germany as a production facility for cars is losing its importance," said CAR's report.

Early on, Wolfsburg city officials saw the writing on the wall and realized that they had to do something.

"It's becoming harder and harder to have industrial jobs in Germany," said Wolf Schnellecke, Wolfsburg's mayor. "Because of this industrial change, we need to create new jobs. That's what we are trying to do."

He and other city officials hope to wean Wolfsburg from its strong dependence on the automaker by diversifying its economy. In 1998, the city began its drive to enact structural changes in Wolfsburg to compensate for the rapid changes in the automotive sector. 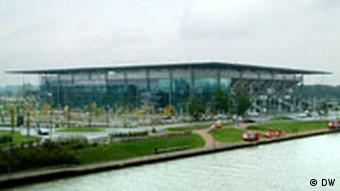 Wolfsburg's stadium is one of the city's new attractions

The plan calls for Wolfsburg to become a center for entertainment, tourism, sports and leisure. Schnellecke wants the city to become a destination for tourists, not just for automotive parts destined for new VW Golfs and Jettas.

"Wolfsburg was founded almost 70 years ago because of a certain economic situation in Germany," he said. "Now we're experiencing a second foundation and a new phase of development in our city."

In 1994, a new art museum opened in the city. In 2000, a gleaming new VW Autostadt, or "Auto City" opened its doors. Sort of a high-tech amusement park centered around the car, it has attracted more than 12 million visitors. 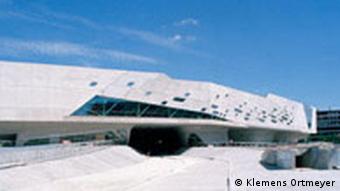 In December 2002, a new stadium opened its gates, the Volkswagen Arena, where the local soccer team plays. And in November, the Phaeno science center was inaugurated. The building, designed by star architect Zaha Hadid, has helped put the city on the global architectural map. Officials hope the center will see 180,000 visitors pass through its doors annually.

According to Schnellecke, the strategy is working, since more than 20,000 jobs have been created thanks to the city's diversification drive. It helps that Wolfsburg is in the center of Germany, and only one hour by fast train from Berlin. And while VW is hurting, it's still a global auto giant with money to invest in its headquarters city.

Schnellecke admits Wolfsburg is not out of the woods yet. Around 50 percent of the population still works in some capacity for Volkswagen, which in September announced job cuts of up to 14,000 at its European factories. Wolfsburg's unemployment rate is around 11 percent, at the national average, but is up several points from two years ago. 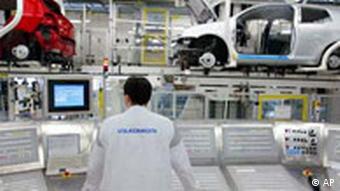 There might be fewer production lines in Wolfsburg soon

"We're in a bit of a critical situation with VW now," said Schnellecke. "It proves that we were right in trying to get on new paths economically."

Markus Hesse, who teaches city and regional planning at the Free University in Berlin, agrees that diversification is essential, and that Wolfsburg was right to begin the process early on. But he says the ability of stadiums, museums and entertainment centers to provide a balance to the economic heft of VW is limited.

"They cannot compensate for the main industrial product of the city, VW cars," he said. "The new things get a lot of attention and bring people to the city, but keeping the VW factory successful during this structural change is just as important, if not more so."

Wolfsburg is not the only city facing a decline of its traditional industrial base, although it is one of the few German cities having some success with creating new sources of revenue. 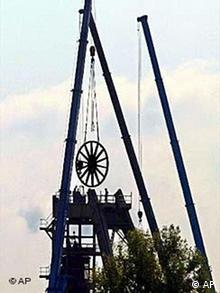 The heavily industrial Ruhr region faces with a bleak future as more and more of its unprofitable factories and mines shut down and legions of workers with few transferable skills lose their jobs. Some cities in the region are trying the Wolfsburg strategy, like Essen, which is applying to become a European Cultural Capital in 2010, but it's an uphill battle.

"There is really nothing that can compensate for the massive deindustrialization in this region," said Markus. "[The cities] all have to reorient themselves, but they have a lot less going for them than Wolfsburg."

Volkswagen has confirmed plans to cut more than 10,000 jobs in Germany. The company will avoid outright layoffs, instead trimming its workforce by offering early retirements and part-time positions for older workers. (Sept. 6, 2005)

Beetle Races to Another Milestone

Seventy years ago, the Nazis unveiled a "people's car" that would make driving affordable for the masses. The Volkswagen Beetle managed to shed its dark childhood and went on to become the world's best-selling car. (July 4, 2005)

The nightmare scenario of the German economy becoming one based on trade rather than production has some basis in fact. But while some companies are moving production abroad, it's not necessarily a bad thing for Germany. (Jan. 26, 2006)