If German Justice Minister Heiko Maas has his way, platforms like Facebook will face fines for hosting illegal content. In a rare direct statement, Facebook says it should not be tasked with "state responsibilities."

Facebook isn't happy about a draft law, currently in committee in the Bundestag, that would impose fines on social media platforms if they fail to delete hate speech and other sorts of illegal expression. The German weekly business newspaper Wirtschaftswoche published excerpts from a German-language statement to be released on Monday in which the social media giant went on the attack.

"The legislative state cannot pass on its own shortcomings and responsibilities to private companies," the statement read. "Preventing and combating hate speech and fake news is a public task that the state cannot avoid."

Theoretically, if the draft legislation becomes law, Facebook could face fines of up to 50 million euros ($56 million) - too much, says the company.

"The amount of the fines is not commensurate to the behavior that would be sanctioned," the statement read. Facebook also warned against Germany "going it alone nationally" and called for a European solution to the problem of hate speech.

It is rare for Facebook, which often speaks in Germany through PR representatives, to issue direct statements. The Justice Ministry under Maas has promised to get the anti-hate-speech law through the Bundestag before the end of this legislative period in June. But it's proving quite controversial.

Critics object that the law will lead to perfectly legal expressions of free speech being banned on social media platforms. They fear that companies like Facebook will err on the side of restrictions rather than risk fines. One such critic is the photo-journalist and blogger Markus Hibbeler.

Hibbeler was given a one-week ban on Facebook for a post critical of Islam. It was his second ban in a matter of weeks for what he says were primarily criticisms of cultural hypocrisy and defenses of freedom of speech.

"I once reported a post by a Salafist with instructions how to carry out an attack using a truck, and even that wasn't deleted for violating community standards," Hibbeler told DW. "But a call for freedom of expression and criticism does violate those rules. That can't be. It's a double standard."

Hibbeler didn't pull any punches with his original post, writing, for instance, "We shouldn't shield Muslims, and certainly not Islam, which has never been through an enlightenment or reformation, from criticism and constantly protect them." But the post doesn't defame Muslims as a blanket group, and Hibbeler explicitly distances himself in it from racism.

Hibbeler engaged a lawyer and threatened to sue Facebook if he wasn't reinstated and the deleted post restored to his page. On Monday, Facebook officially apologized and said that the post had been restored. 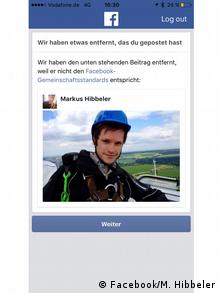 Facebook attributed the deletion to an employee's "mistake," and the case illustrates the potential pitfalls of self-monitoring. Hibbeler never received any substantial explanation from the social media platform about precisely why he was banned, but he suspects it has something to do with an overworked moderator.

"They have people sitting there who get a lot of reported posts that they have to read through," Hibbeler says. "And of course a post like mine that got more than 3000 likes has a lot of fans but also some enemies who say 'We'll show that guy.' I imagine that the post was reported a lot, and that a Facebook employee just skimmed through rather than reading it."

Hibbeler's surmise tallies with an investigation published late last year by German daily Süddeutsche Zeitung about the working conditions of the 600 monitors Facebook employs in Berlin. According to the report, monitors are required to evaluate around 2000 posts a day, some involving extreme violence, pornography or other potentially traumatizing content. They are paid slightly above the minimum wage and are only given minimal training, the newspaper reported.

If that is the case, it would hardly be surprising if mistakes were made in the evaluation of posts.

Whether Facebook is capable of the sort of monitoring the Justice Ministry's draft law requires is one question. Another is whether a private company should be given that sort of responsibility in the first place.

"The problem with the law," Hibbeler says, "is that a social network like facebook is de facto a mirror of opinions and debates in this country. So when it's forced to perform a public legal task and told to delete posts within a week or pay millions in fines, a private company like Facebook will delete posts that shouldn't be deleted in cases of doubt. That's what I'd do if I owned a social media network."

Hibbeler says that he wouldn't have a problem with the legislation "if it affected the right people" but fears that as things stand, it would function as a "censorship law."

The Justice Ministry declined to comment on either Facebook's statement Monday or the Hibbeler case. But it reissued a series of statements made by Maas recently on the law in general and the issue of public versus private responsibility in particular. Maas says that the law entails a mixture of state and self-monitoring and that Facebook will not be determining the boundaries of acceptable speech.

"Neither social-media networks nor state agencies will be setting the standards for what is to be deleted," Maas said on May 18. "The only things determining those standards are the laws democratically passed by the German Bundestag. Every one of us has to obey these laws every day. We want social networks to adhere to them and no longer allow their infrastructure to be abused so that people can commit crimes."

With Germany's parliament discussing a social media law to combat hate speech online, social media companies have voiced concerns about how it will impact their operations. But how far is too far? DW examines the trends. (29.05.2017)

A term of up to 10 years is also possible for fake news deemed to target top officials. Tunisia's president was awarded additional powers following a referendum in July.

Eric Zemmour, who plans to run for president in April, has been fined for remarks about young migrants made in 2020. He accused the youngsters universally of being "thieves, killers and rapists."