$125 billion has been wiped off the value of the social media giant after it reported slower revenue growth. A day earlier, China withdrew its approval for Facebook's planned "innovation hub" in Hangzhou. 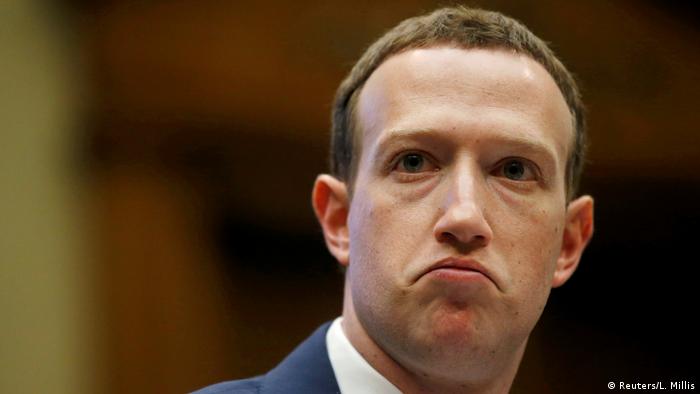 Shares in Facebook fell as much as 20 percent on the NASDAQ on Thursday after the company reported slowing revenue growth amid larger expenses to address concerns over privacy and security of user data.

The company's financial results were close to expectations, but a weak outlook spooked the market. Profit was up 31 percent in the second quarter at $5.1 billion (€4.36 billion); revenues rose 42 percent to $13.2 billion, slightly below most forecasts.

Growth in new users slowed with Facebook adding 11 percent more active daily and monthly users on the main Facebook app in the second quarter, compared with 13 percent in the first quarter.

Facebook admitted that growth going forward would be far weaker than previously estimated, due to privacy concerns but also due to limits to growth in advertising revenue, which accounts for virtually all of its income.

The admission saw more than $125 billion wiped off the social network's value — believed to be the worst single-day evaporation of stock market value for any company.

A data privacy scandal involving the political consulting firm Cambridge Analytica and misinformation on WhatsApp contributing to mob killings in India have added to the pressure on Facebook to re-evaluate how its services maintain security and decorum.

Investors took flight just hours after it was revealed that China had rejected the tech giant's plans to open a new innovation hub in the eastern city of Hangzhou.

Facebook had said on Tuesday it was planning a $30 million subsidiary that would support Chinese developers and startups, similar to projects in Brazil, France, India and South Korea.

But a person familiar with the matter told the New York Times on Wednesday the Chinese government decided to withdraw Facebook's registration due to disagreements between local officials and the national internet watchdog, the Cyberspace Administration of China.

The move is a further setback for Facebook, which has been struggling to gain a foothold in China, the most populous country in the world, where its social media site and messaging app WhatsApp remain blocked.

The incident illustrates how difficult it can be for a US company to navigate the government bureaucracy in a country where so many technology firms have tried and failed.

Beijing also bans many other international websites, including Google, Twitter and YouTube as well as news websites such as the New York Times and the Wall Street Journal, in addition to human rights websites documenting issues deemed sensitive by the Chinese government.

New EU Copyright Law: Will Upload Filters Destroy the Internet as we Know it?

New copyright filters in the EU: Platforms like YouTube have to filter uploads by users for copyright infringements. Critics fear the end of memes and say this will destroy the internet as we know it. (25.06.2018)

Germany's highest court has ruled that inheritance rights come before data privacy. Heirs should have access to the Facebook accounts of the deceased, the court has ruled. (12.07.2018)