Hamilton stole the show with a fantastic drive in Portugal to secure 92 career race wins, moving him ahead of Michael Schumacher. After a wild start to the Grand Prix, the Mercedes pair moved away.

Lewis Hamilton delivered yet another strong drive to win the Portuguese Grand Prix ahead of Mercedes teammate Valtteri Bottas. The win saw Hamilton claim his 92nd career race win, one more than legendary driver Michael Schumacher, and moves him one step closer to a seventh drivers' championship.

After a wild start that saw multiple positional changes and an early struggles for the Mercedes, Hamilton took command. The Briton seemed to gain an advantage over his teammate thanks to better looking after his tires early on as dark clouds and drops of rain threatened to change the race.

Despite picking up cramp with seven laps to go, Hamilton set a new fastest lap and couldn't be stopped from making history.

"I could only have ever dreamed about where I would be today. I'm proud to make the most of it every single day," — Lewis Hamilton.

Pierre Gasly (AlphaTauri) — A sweeping move on the penultimate lap saw the Frenchman claim fifth off Sergio Perez as the Frenchman enjoyed a fantastic day of overtaking, driving and decision making.

Renault — With both drivers finishing in the top 10, this was a good day for the French team. With both drivers starting 10th and 11th, to both improve in difficult conditions was a testament to smart driving when others around them took one risk too many. 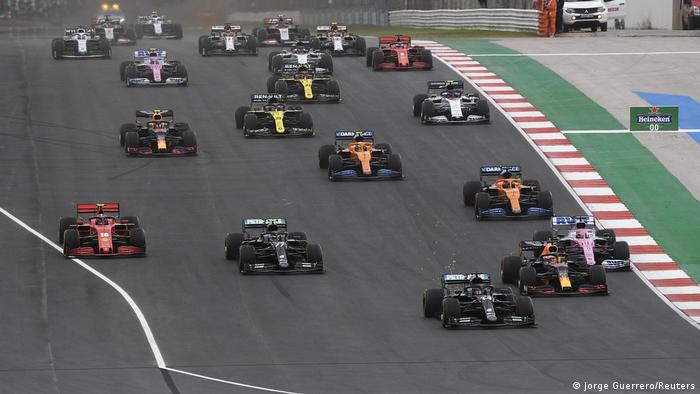 Hamilton says he has cramp and that sounds painful. It shouldn't stop his win here, but can you even imagine how much that hurts? Hasn't stopped him from posting another fastest lap though. Crazy. The battle in the middle of the pack is close with Vettel chasing Ricciardo and Ocon. Gasly working hard to close in on Perez but might be just beyond him. Raikkonen is still in 11th, a really good day for him all things considered.

Stroll retires with 12 laps to go. After one crash and two 5 second penalties that probably makes sense but it's rough. A strong start but some overly risky decisions backfired. Ocon pits but 4.5 seconds isn't great and he drops to 8th, just behind his teammate. Vettel into 10th. The German has looked good today, some shades of his former self. Perez, in 5th, driving faster than Leclerc in front of him. Russell complains the wind is picking up and making life very hard, as does Verstappen. Leaving track limits becomes a big problem for some drivers. Too many of those and a warning turns into a time penalty.

Verstappen closes gap on Bottas by half a second in sector two and three. Gap is probably too big though, at 8 seconds. Hamilton posts a fastest lap and is now a whopping 12 seconds clear. Leclerc in 4th but still a way off Verstappen so looks like the podium is set. Gasly hunts down Ricciardo and then Sainz to move into 7th. Albon's pit stop was 1.8 seconds. That is bonkers fast, but he has just been lapped by Verstappen. He has been in the box on one more occasion though. Russell, who was once in the points, is back in 14th. Vettel in 11th.

Russell finally pits. It would be crazy if he doesn't have a seat next year, but that is what some of the talk sounds like. Bottas close to a warning after going out on corner four too often. Sure the Finn will get that sorted, but he is worried about vibrations in the car. He is stuck in traffic too, traffic that Hamilton has already made his way through. Sainz pushing to take Gasly. Just half a second between the two and Ricciardo not far in front of the Frenchman either. Hamilton told to pit, to which he responds the tires are still good. Excellent pit stop, and Hamilton comes out on the hards. Bottas back in front but then pits, calling for softs so as to maybe chase Hamilton down. He gets hards though and that's probably that.

A fun battle between Raikkonen and Sainz for 10th. "The Iceman" keeps his cool, but only for a moment as Sainz eventually streams past. Bottas says his car is telling him to cool the engine. That wouldn't be great. Hamilton is stuck in the middle of the pack, because he's just that fast and because of pits. Perez and Ocon battling hard, but Ocon holds Perez at bay for a long time but the Mexican eventually squeezes by. Leclerc pits, moving to hards just like Vettel. It's a great pit stop. He comes out in 4th too, which shows you how spread the field is. Russell really driving well, in 7th, but still needs to pit.

Russell is on course for a career best finish, but has yet to pit. Hamilton keeps posting fastest laps and is streaming away at the front. This looks done. Vettel does finally pit and goes to hards so could theoretically not need to put again. Ricciardo also driving well and takes Gasly to move into 8th. Stroll gets another 5 second penalty for leaving track limits. Ouch.

Gasly passes Sainz, as expected. Bottas is losing over a second on Hamilton, which is an awful lot of time. Looks like Hamilton might have looked after his tires a bit more at the start - smart and somewhat unusual for Hamilton who has history of tearing up tires. Hamilton now says he feels his tires are fine and then posts a fastest lap. Crazy good. Perez, recovering from his bump at the start, slipping up to two spots into 10th with some neat moves. It is windy, the rain is returning, and it is gray, which makes life much harder for everyone. Verstappen pits and comes out in sixth. Stroll gets a 5 second penalty.

Ricciardo pits after his times keep getting worse. Gasly really driving well and is closing in on Sainz. Stroll also pushing, and he tries to force it too hard in corner one and suffers for it. The Canadian picks up damage in a crazy attempt at a pass. He has to box, and so does Norris who is audibly angry on the radio and it looks like Stroll will be penalized for that.

Hamilton posts the fastest lap. Are his tires going to last longer than Bottas? He is faster than Bottas, and on the home straight he uses DRS to pass his teammate. Some drivers are starting to pit, Vettel benefits from this as he stays out on his mediums and moves into 8th.

Hamilton increases his pace, speeding up by half a second per lap. Nevertheless, Bottas takes the fastest lap back off Verstappen. Top two are on mediums, Verstappen on softs but the Dutchman says his front left tire is dead - and that is clear in the lap times. Pits expected around lap 20 or so, but maybe sooner for Red Bull. Leclerc passes Norris and eventually hunts down the next McLaren in Sainz too. Ricciardo also uses the straight to make a pass, Raikkonen the one who drops, keeps dropping and pits. Gasly driving well, moving into 6th. The home straight is the place to overtake but the wind is picking up, 15 km/h and now coming from the east.

Verstappen looking to attack Norris in the battle for fifth, and slips by on the home straight thanks to DRS. Despite a few bumps back there, no safety flag. Perez was the one who spun after Verstappen didn't leave him much room and now finds himself at the back of the grid. Bottas posts the fastest lap and then reels in Sainz to take back top spot. The Spaniard's wheels now suffering a bit, as he says over the radio, and Hamilton also overtakes him. Now it's a shoot-out at the top. Verstappen then goes fastest around the track and also takes Sainz.

Off we go! What a start! All sorts of movement in a wild beginning. Verstappen first makes a move ahead and then gets reeled in by Bottas. Then Hamilton looks in trouble and slips back with Bottas going first. Sainz though, on softs, isn't having any of it and takes the lead! Verstappen sliding all over the place and ends up in fifth. Changes all over the place. Raikkonen also enjoyed a magical start and is in 6th. Leclerc down into 8th.

Today, Lewis Hamilton can seal the most race wins of all time (92), edging ahead of Michael Schumacher. Today can also be the day Mercedes seal their seventh straight constructors' title. To do so though, they would have to top Red Bull's haul by 40 or more points, which would mean both Max Verstappen and Alexander Albon would have to have days to forget. It will soon be time to find out how things pan out in Portugal, whether the wind and the potential rain will play a role.

Despite sweeping the practice sessions, Valtteri Bottas was pipped to pole position by Mercedes teammate Lewis Hamilton, putting the Briton in a commanding position for the race in Portugal.

After a 30 minute delay due to a loose drain cover and the Grande Premio De Portugal track making its F1 debut, it was new territory for most of the drivers in the twelfth race of this 17-race season.

Bottas took pole first before Hamilton, chasing what would be a record 92 race wins, stole pole by just over one tenth with a time of 1:16.652. It was the Briton's ninth pole of the season, the 97th of his career and means Mercedes have had every pole this season. It was another tough break for Bottas who keeps having his best topped by his teammate.

"I can't tell you how hard that was today, yes we've got a great car but you have to drive your nuts off here this weekend." — Lewis Hamilton on sealing pole position.

The Grande Premio De Portugal was used for preseason testing in 2008 but this is its first ever F1 race. The 4.65-kilometer (2.9-mile) circuit in Portimao is undulating with frequent elevation changes that sends drivers up and down before culminating in a plunge down to the final right-hander. Despite the race lasting 66 laps, overtaking is difficult here so a good qualifying time is pivotal.