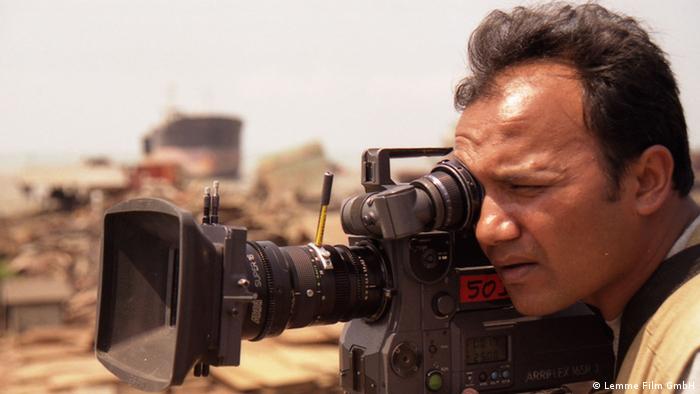 "Five meters long, two meters wide - ten square meters. To a certain extent, one almost feels at home." Daniel, ein Offizier an officer with the German Bundeswehr, speaks almost adoringly about his small barracks at the base in Kunduz. His six-month stay in Afghanistan is part of the ISAF coalition forces is nearly over. Soon, he will be able to go back home to Germany. But he would like to return to Afghanistan. "This is real life over here," he says. 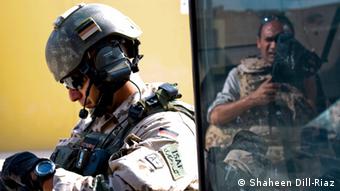 German and Afghan soldiers in Afghanistan

Just three kilometers further down the road at the Afghan barracks, Leutenant Mehdi shows his tattoos and a deep scar on his upper arm to the camera. "I see no difference between the Afghan and the German soldiers," he says, in an almost defiant tone of voice. But he does know that soldiers like Daniel will return to their own peaceful countries. He himself would also much rather be with his wife and children in Kabul. But war is not far from there either.

In his most recent film, "Side by Side," the Bengali documentary filmmaker Shaheen Dill-Riaz presents a moving and deep portrayal of two soldiers - one German and one Afghan - in Afghanistan. His candid shots and personal interviews convey the yearning for normality in a country which has been at war for so long.

"In Germany, a lot is reported on the war in Afghanistan - attacks, the general situation of the country and the Taliban. But the story of the soldiers is often forgotten," Dill-Riaz told DW. "In this film, I did not want to focus on the war in Afghanistan, but instead on the lives of the people involved. I wanted to get close to both main protagonists and give them as much room as possible." 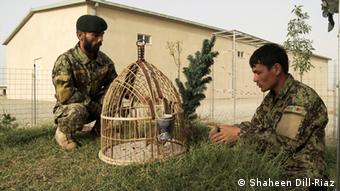 Scene from "Side by Side"

The motivation behind the film is very personal for the 43-year-old who has lived in Berlin since 1992. "When I was 12 years old, my parents in Bangladesh sent me to a military boarding school, where I met a number of soldiers. I always asked myself how they felt when they were sent to war and how they would deal with the stress of war."

His earlier films also show Dill-Riaz's ability to show the dreams and desires of people who in many cases at the fringes of society and had to fight for their survival. For his film "Iron Eaters" - a portrait of extremely poor seasonal laborers working in abominable circumstances at a giant shipyard in Bangladesh - he won the prestigious German Grimme Preis in 2010.

In his film "The Projectionist," Dill-Riaz tells the story of a 10-year-old boy named Rakib, who lives in the Bengali town of Chandpur and goes to the cinema every day after school to work as a cinema operator to help financially support his family. The film is an unsentimental portrayal of Rakib's every-day life with a father who neglects his family and a mother in despair. 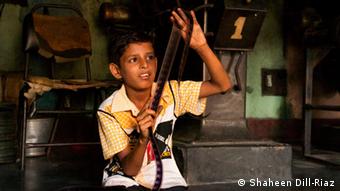 Scene from "The Projectionist" by Shaheen Dill-Riaz

In the middle of all of these personal and social conflicts, stands Dill-Riaz, carefully watching the lives of these extraordinary protagonists. The people are the center of story and not their circumstances. The audience is captivated by how Rakib operates the old-fashioned cinema equipment as the colorful and modern world of Bollywood plays out on the screen in front of him just a few feet away. Rakib takes control of his hard life and dreams of going to Italy. Not because he has heard of the "Cinema Paradiso," but because he believes that life is good there.

"I was really surprised that "The Projectionist" turned out to be such a success," Dill-Riaz admits. "We shot the film in 13 days on a very low budget. I was simply fascinated by the young boy's life and had to film it."

In November, Dill-Riaz was awarded the German filmprize for socio-political documentaries for children, the "Große Klappe," for "The Projectionist."

From Babelsberg to Bollywood

The Mumbai Film Festival is celebrating 100 years of Bollywood. From the very beginning, there have been prime examples of Indo-German cooperation in film. Now, young screenplay authors are reviving the tradition. (23.10.2012)

India's biggest neighbor plays a role in its films

It's a difficult relationship, even in film. India produces more movies per year than any other country. Yet Bollywood sometimes distorts, rather than reflects, India's complicated relationship with China. (19.10.2012)