Expulsions in Washington and Caracas as US-Venezuela row heats up

The US has expelled Venezuela's charge d'affaires and two other diplomats. The move comes in reprisal for the expulsion of Kelly Keiderling, the top US diplomat in Venezuela, from Caracas. 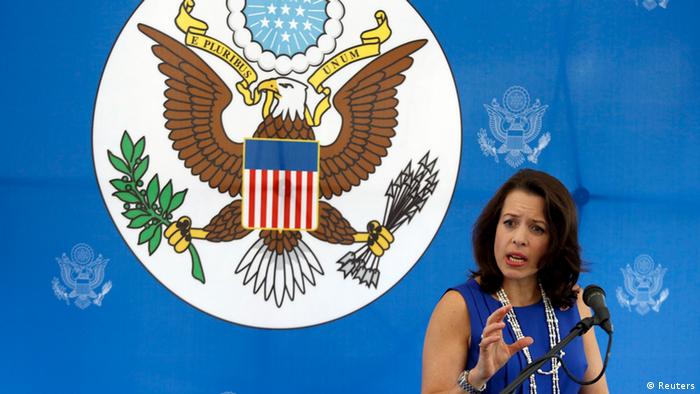 The move to kick Charge d'Affaires Calixto Ortega Rios out of Washington came a day after three US diplomats found themselves expelled from Caracas, accused of plotting acts of sabotage against the country.

Venezuelan officials called the move unjustified, saying the diplomats in Washington had not met with people opposed to President Barack Obama in order to undermine their host country, as it accused the US officials of having done.

According to Venezuela, the US diplomats, including Charge d'Affaires Kelly Keiderling, met with the country's "far right" - the government's term for the opposition - to finance President Nicolas Maduro's opponents and encourage actions to sabotage the power system and the economy.

Venezuelan President Maduro began his term in April, after winning an election following the death of his mentor Hugo Chavez, and has continued the anti-US populism that had served the revolutionary-cum-head of state so well during his 14 years in power before succumbing to cancer.

Relations appeared to have eased in June, when the two countries agreed to begin discussions aimed at returning ambassadors to Caracas and Washington after talks between US Secretary of State John Kerry and Foreign Minister Elias Jaua. However, Venezuela broke off the rapprochement in July after the diplomat Samantha Power, now the US ambassador to the United Nations, lumped the country in with other "repressive regimes."

"While the government of the United States does not understand that it has to respect our country's sovereignty there will be simply be no cordial relations nor cordial communication," Maduro said Tuesday in Caracas. "The day that the government of President Obama rectifies the situation, we will establish new points of contact to discuss common issues," Maduro added.

US State Department spokeswoman Jen Psaki said on Tuesday that Venezuela's charges appeared to have arisen out of a trip to Bolivar sate, home to the country's main hydroelectric plant, by the three Americans, who, she said, "were there conducting normal diplomatic engagement." According to the Venezuelan government, Keiderling had acknowledged meeting with members of "civil society" as part of her normal diplomatic work.

Over three months after taking office, Venezuela's president still hasn't gotten his country under control. He not only faces relentless opposition, but also critical opponents within his own party and the weak economy. (02.08.2013)

The Foreign Ministry blasted this as "a confession of open interference in the internal affairs of Venezuela."

The two countries have not had ambassadors in each other's capitals since 2010. Still, over several years of public diplomatic spatting between the two countries, the US has managed to faithfully remain Venezuela's top oil buyer, purchasing 900,000 barrels a day in addition to attempting to thaw the tension between the two capitals.

"We've had a relationship with Venezuela that we've been working on for some time," Psaki said. "We're not going to give up on those efforts."