Expert: Roots of Europe′s Resentment of US Go Back Centuries | Europe| News and current affairs from around the continent | DW | 11.08.2007

Expert: Roots of Europe's Resentment of US Go Back Centuries

Europeans have developed a high level of anti-Americanism. Andrei Markovits, an American expert on Germany, says politics is just one of the many spheres where Europeans oppose the big and powerful United States. 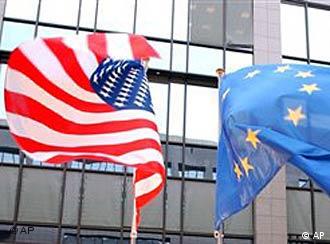 Europeans have resented Americans since the latters declared independence

Andrei Markovits is the Karl W. Deutsch Collegiate Professor of Comparative Politics and German Studies at the University of Michigan, Ann Arbor. He has written several books on Germany and recently published "Uncouth Nation: Why Europe Dislikes America."

DW-WORLD.DE: Why does Europe dislike America?

Andrei Markovits: It certainly has many historical reasons. The Bush administration's policies have driven it into overdrive but all the constituent parts have been there since, at the latest, July of 1776. European elites hated America from the get go, because it was republican. It then became powerful, and it obviously intervened in Europe throughout the 20th century, which is to many Europeans a benefit. But, of course, nobody likes a rich uncle.

Bush and Iraq aside, would the relationship be comparable to a family: Older siblings being jealous of a baby? 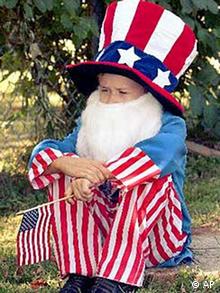 The baby grows up, and becomes the rich uncle. The baby is now the one that cleans up the big mess in the family in the 20th century. It is a dominating and exacting baby. Babies are only loved, but babies that become big men are certainly not just loved. America represents modernity from the 19th century on. Anyone who fears modernity associates it with America. It is ruthlessness. For Europeans, it is uncultured, flimsy, fleeting, quick.

What is it that Germans dislike about the US?

Pretty much everything. Americans are puritanical and, of course, also oversexed -- it is what I call the bikini problem. If you wear a bikini in northern Europe you are obviously prude, because everyone in northern Europe goes topless, but if you wear a bikini in conservative areas you are oversexed. What is interesting about anti-Americanism is that whatever you do and its opposite is what is disliked. It is a duality, a clearly unilateralist, but in many cases multilateralist, which is also hated. Let's not forget that it was the German Chancellor [Helmut] Schmidt, who lectured Jimmy Carter how the US should behave like a real leader, not a church guy, who is into human rights. I can not think of any area where there is not some resentment about the United States in any German discourse: University reforms, even sports. You can go to a German soccer game and you see signs that Schalke is against Americanization. If there is an area in which the US had zero influence on the world, trust me, that is the world of soccer. And even there the word Americanization completely permeates the discourse.

There is this view that the US saved Germany in the Second World War. Do you think some of the anti-Americanism stems from the fact that the US did win the war? 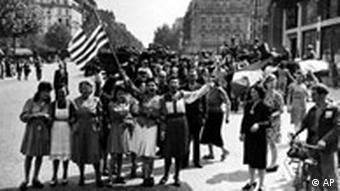 Absolutely! Here they were, they saved Germany, they introduced democracy, too. Of course then the Germans grew and became superb at it to their great credit. The very fact that the Americans, ultimately, not only imposed democracy, but also imposed a successful democracy, helped West Germans win the Cold War. Suddenly the baby has become the big guy who is really helping. The thing that you place our finger on is a particularly German dimension of resentment that comes as a form of immaturity, and no one likes to be immature. Germans detested Americans, although of course they detested them less than they detested the Russians. This helped tremendously in the legitimation of the federal republic and the American presence. After all, if you are occupied, why not be occupied with people that bring you chocolate and nylons.

Is it simply envy?

Envy is too simple. I don't think by now Europeans envy America. Envy is something very clear, and you can overcome that. This is much deeper.

Why shouldn't Germans envy the US? 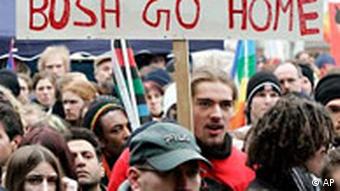 The American president is not exactly welcome in Europe

Because of health insurance, public goods, better streets, and on and on. For example, if you're a citizen of Hamburg versus your normal guy in Chicago, then chances are that your life actually in Hamburg is better. Your normal Hamburg guy today resents the United States, but does not envy it. Envy might have been an issue right after the war. Envy is a very clear emotion which is very open, to which people admit. Looking at surveys, very few people really admit how the US is disliked. If you ask them point blank: Are you anti-America? They will say, 'Oh no, I am just anti-Bush.'

What do you see happening in the rest of Europe in terms of improving relations with the US?

In Germany, improving relations already happened after the Schröder administration. Things are, no question, better, and hopefully, with a Democratic president in 2008, things will get better on that level, as well. This will, however, not eliminate the underlying resentment and anger. But don't forget that Europe has now become functional. Europe is now a big boy himself, and Europe has interests. Europe would be a fool not to use global resentment against the United States to its own advantage. And it does. If I'm a European businessman, and hustling against an American company, I would be a complete idiot if I would not harness the resentment towards America that has in fact become a global lingua franca. This is always much stronger on the elite level than people level. It is very interesting that across the board in Europe, anti-Americanism has always been stronger among the elites, the chattering classes. Basically, anti-Americanism is one of the last completely accepted and indeed lauded prejudices in cotemporary polite society.

Why is that? Prejudices are usually more common among less educated people. 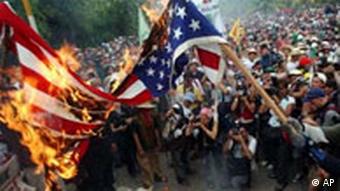 In this case, it is a resentment of superiority: We [Europeans] might not have the power, but they [Americans] are the newcomers to the world history. But we [Europeans] have the refined things in life, and that is less important to less refined people. Also don't forget that America by its very nature was a populist country which in fact rejected the old, European aristocratic order, so that from the get go, European aristocracy, and hence the elites, always disdained it. It is in fact, the only prejudice you can voice openly. No one thinks for a second to just go on about the Americans as being fat, ignorant, stupid, uncultured, etc. The reason is because you are in fact allowed to voice prejudices and distain towards a Mr. Big. I think it is very good that you can't say this against the weak. It is a wonderful advance since the late 1960s, that you can not go on and on about blacks, or women, or handicapped, but you can do it towards the dominant culture, which, in this case, are the white males, which is America.

Does this make it OK to have prejudices against the US as a whole, since it is the dominant society?

No, it does not make it okay.

How can it be changed?

It can't be changed. It might become better with the end of the Iraq war, and Hillary [Clinton] as a president, but it won't disappear. Today, it is hard for young American students to be in Germany -- they constantly have to explain themselves. You basically have to start every conversation with "I hate Bush." For you to be seen as a half-way decent human being, that is the opening gambit. Americans need to constantly prove that they are the good, different American. This goes on all the time. It is a general discourse, which I don't think will disappear anytime soon.

Ahead of the release of his memoirs, Gerhard Schröder says George Bush left a positive impression on him, but the US leader's constant references to God troubled him. Schröder had few kind words for his own successor. (22.10.2006)