Christina Ijabla was held kidnapped by Boko Haram for two years. She's told DW about life in an Islamist militant prison camp and how she had seen the elusive Chibok girls, whose seizure sparked international outrage. 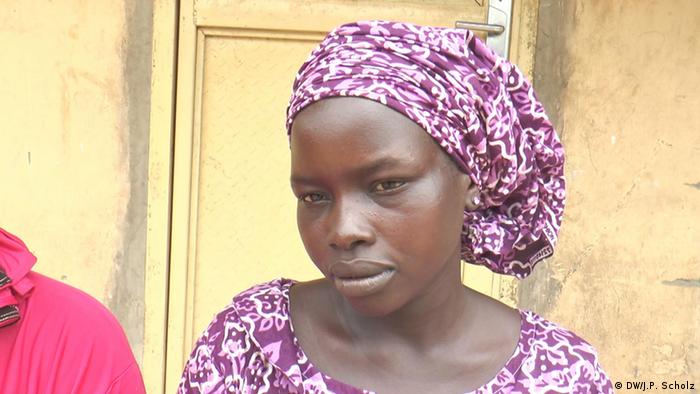 DW: Christina Ijabla - you were kidnapped around two years ago when Madagali, your home town in northeastern Nigeria, was overrun by Boko Haram fighters. What can you remember about the day you were abducted?

Christina Ijabla: I remember hearing gunfire and everybody started to run away. It was chaos, everybody was left to fend for themselves. Suddenly five men appeared, blocking our way. They asked why we were running away. We told them that we were trying to get away from the fighting. Then they said simply: you are not going anywhere. We pleaded with them to let us go, but they showed no mercy. They then took us to a house in Madagali where we were held as prisoners.

Following the election of President Muhammadu Buhari a year ago, the Nigerian military has re-conquered large swathes of northeastern Nigeria which were formerly under the control of Boko Haram - including Madagali. Did that have any impact on your kidnappers?

About a year ago, the fighters in Madagali took us to the Sambisa Forest [a Boko Haram stronghold near the border with Cameroon] It was a four-day forced march. They tried repeatedly to coerce us into marriage. We refused and they became even more violent and brutal. They said that they would kill us and our families and that they had complete control over us. Then they blindfolded one of the girls - one of us - and shot her before our very eyes. Then we did what they asked. From then on, the fighters slept with us, mostly in the evenings. We hardly saw them at all during the day. And if we put up any resistance, they would simply hit us.

What else can you tell us about life in the Sambisa Forest?

We had to sleep under trees. There were no houses. They put up simple perimeter fences made of thorny bushes around the individual camps. There are many small camps where women and children are being held. And there are guards to ensure that nobody escapes. There are headcounts mornings and evenings. There is only maize to eat, no meat or spices.

It is believed that the Chibok schoolgirls who were kidnapped two years ago are being held in the Sambisa Forest. What do you know about them?

They were held right next to us at a place called Kago. We saw them once while they were being forced to read out loud from the Koran, but we were told to keep out of their way. They were given special treatment, of sorts. Some had been married off to Boko Haram commanders, but most of the girls, as far as I could see, were still together as a group.

And they are all still alive?

They had been held previously in Gwoza [a former Boko Haram stronghold that has since been reclaimed by Nigerian military]. Three of the girls were killed - I assume by mistake - in an aerial attack by the Nigerian military. The remainder, as far as I am aware, are still alive.

Did you hear anything about Abubakar Shekau, the leader of Boko Haram?

I have heard of him, but have never seen him in person. I remember one Friday all the fighters were called together so he could address them. He told them that they should not allow themselves become dispirited by the Nigerian army's recent territorial gains. He also told the fighters that they should bring more women and children into the forest so that God's will could be done. I know this because they distributed audio recordings of his speech.

He was urging them to carry on fighting despite the setbacks. It sounds as if Boko Haram has its back to the wall?

The Nigerian military are making deeper and deeper inroads into Sambisa Forest. They have destroyed many of the bases where Boko Haram was storing food, weapons and vehicles. I have seen many fighters who have been killed, including the bodies of commanders and their wives and children. I have heard that Shekau is seeking negotiations with the government over the possible release of the Chibok girls.

Is it true that women often face discrimination on returning to their villages after having been held captive by Boko Haram?

Yes, they are afraid of us. You can only really rely on your own family. But the soldiers treated me well. While I was still on the run, I told them what had happened to me. They looked after me and even gave me some money. The other girl who was with me was questioned by the military about conditions in the Sambisa Forest.

The fate of the Chibok schoolgirls has made headline news over the last two years whereas the ordeal undergone by yourself and many other young women in captivity has received far less attention. Don't you think that is unfair?

It would be a good thing if more people were aware of our fate. There are still so many who are still in captivity. And I think our government should realize that it must come to our aid. We also need help.

Christina Ijabla, 20, now lives with her uncle near Yola in northeastern Nigeria where she is expecting the birth of her son who was conceived while she was in captivity. So far she has received no welfare assistance from the Nigerian state since her escape from Boko Haram in April 2016.

The Niger Delta Avengers have attacked again. After community leaders expressed support for the militants' third attack this month in the oil-rich but desperately poor region, fears grow that oil production will suffer. (28.05.2016)