Malaysia's former prime minister, Najib Razak, has had to answer for a $10.6 million transfer into his bank account. Najib was voted out of office this month, in part over his suspected role in the 1MDB scandal. 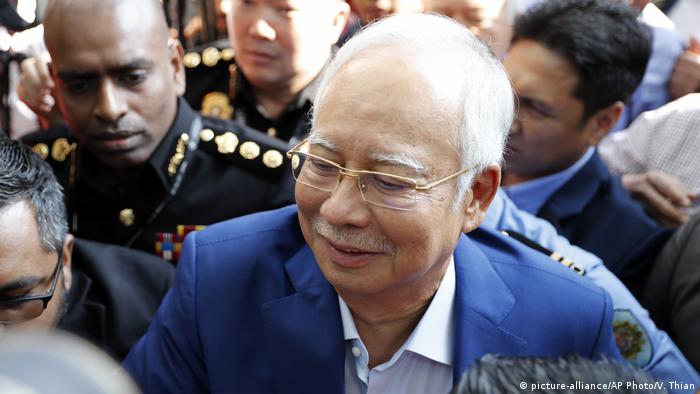 Former Malaysian Prime Minister Najib Razak arrived at the offices of the Anti-Corruption Commission (MACC) on Tuesday for questioning over his suspected role in siphoning money out of the country's development fund.

Less than two weeks after from being voted out of office after almost three decades in power, Najib was ordered to explain a suspicious transfer of 42 million ringgit ($10.6 million, €9 million) into his bank account.

The money is thought to have come from the 1Malaysia Development Berhad (1MDB), a multi-billion-dollar state development fund from which around $4.5 billion went missing in 2015.

MACC chief Shukiri Abdull said he had summoned Najib to the agency to record a statement, not to arrest or charge him, as is being widely speculated.

Swarmed by reporters, Najib arrived at the MACC headquarters in Kuala Lumpur wearing an open-neck shirt and looking relaxed.

The former leader has repeatedly denied any wrongdoing.

However, US investigators say associates of Najib stole and laundered money from the state investment fund through US bank accounts, some of which is suspected to have landed in the ex-prime minister's bank account.

Shukri, who was reinstated to the agency by Malaysia's new government, told reporters that the earlier probe into the scandal was suppressed by intimidation during Najib's tenure.

He gave a detailed account of how witnesses disappeared and officers were purged and intimidated as they tried to charge Najib in 2015. He said that on one occasion a bullet was sent to his home.

"We had our own intelligence sources, that I would be arrested and locked up, because I was accused as being part of a conspiracy to bring down the government," Shukri said, shedding tears briefly as he made his opening remarks in a news conference.

"I was sent a bullet to my house. I never told my wife or my family. I never even made a police report."

Shukri said he was given police protection during a visit to the US following suspicions that he was being watched by Malaysian security officials.

Investigators initially suspected Najib's involvement in the scandal after uncovering $681 million in funds deposited to his account, although he said they were donations from a Saudi royal.

However, pressure on Najib came to a head when he replaced the country's attorney general and ordered several MACC officers to shut down their initial investigation. Public outrage over the government's handling of the scandal saw Najib voted out of office this month after almost a decade in power.

Almost immediately after losing power, Najib and his wife were barred by the new prime minister, Mahathir Mohamad, from leaving the country.

Mahathir has pledged to reopen the investigation into the missing 1MDB funds, setting up a new task force made up of officers from the anti-graft agency, police and the central bank. The unit will be tasked with liaising with "enforcement agencies in the United States, Switzerland, Singapore, Canada and other related countries"

The new focus of the probe is the mysterious $10.6 million transfer into Najib's account that appeared to come from SRC International — a government-run unit of 1MDB tasked with pursuing overseas investments in energy resources.

US vows to continue 1MDB probe

The US Justice Department said on Tuesday it would continue to carry out its own investigations into the missing $4.5 billion in 1MDB funds, much of which passed through US accounts.

"The Department of Justice is committed to ensuring that the United States and its financial system are not threatened by corrupt individuals and kleptocrats who seek to hide their ill-gotten wealth," a department spokesperson said. "Whenever possible, recovered assets will be used to benefit the people harmed by these acts of corruption and abuse of office."