Greek delegate Ioannis Lagos has been arrested after fellow European Parliament lawmakers voted to waive his immunity. He was one of dozens convicted of running the far-right party Golden Dawn as a criminal organization. 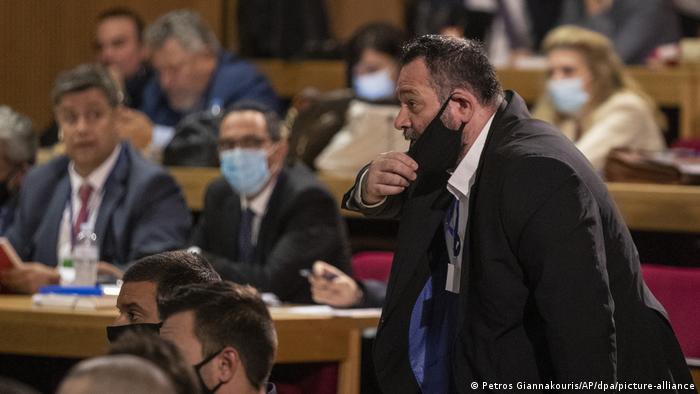 Lagos is one of 39 people, including 13 former Golden Dawn lawmakers, who were sentenced to jail terms after they were found guilty in October of running the party as a criminal organization. The 48-year-old former bouncer was elected to the European Parliament in 2019 on a Golden Dawn ticket, but has since defected from the party and was serving as an independent member of the EU body.

The European Parliament announced earlier that members had voted to waive his immunity from prosecution.

Of the 693 members of the parliament who voted, 658 were in favor of Lagos' immunity being lifted, 25 were against and 10 abstained.

The vote was chaperoned through parliament by French Greens lawmaker, Marie Toussaint, who said it was "essential for the European Union to lift the immunity of Ioannis Lagos so that he can face justice in his country."

"Impunity cannot be tolerated," she said in a statement.

Of those convicted in October, 37 were initially taken into custody. Lagos was sentenced to 13 years in prison but, as a member of the European Parliament living in Brussels, he could not be detained.

The decision paves the way for Belgian authorities to extradite Lagos to Greece.

The other Golden Dawn member who was convicted but not detained is Christos Pappas, a neo-Nazi ideologue and deputy leader of the party who is on the run.

Among those convicted and jailed in the trial, seen as one of the most important in Greece's modern political history, was founder and leader of the party, Nikos Michaloliakos.

The convictions last year came at the end of a five-year politically-charged trial about the party's criminal activities that involved 68 defendants.

Among the acts in which the party was deemed to have been involved was the 2013 fatal stabbing of left-wing Greek rap singer Pavlos Fyssas, physical attacks on Egyptian fishermen and on left-wing activists.

Golden Dawn was founded as a Neo-Nazi group in the 1980s, and saw an upsurge in popularity during the 2010-2018 financial crisis. It achieved parliamentary representation between 2012 and 2019.

A previous version of this article described Ioannis Lagos as a Golden Dawn deputy in the European Parliament. The article has now been amended to show that Lagos was elected to the body as a Golden Dawn member, but has since left the parliamentary group and was serving as an independent deputy. DW apologizes for the error.