EU finance ministers have offered Greece a two-month extension of its financial lifeline. Its current bailout was slated to run out this year, but Greece's new budget has failed to pass muster with its creditors. 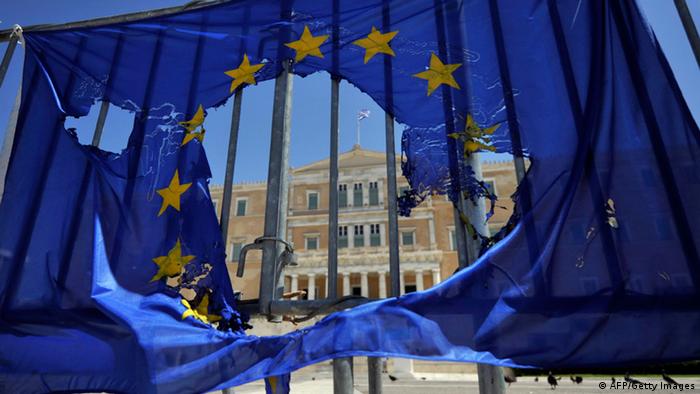 Eurozone finance ministers meeting in Brussels on Monday approved a request from Greece for a two-month extension to its bailout program that was set to end December 31.

Jeroen Dijsselbloem, head of the so-called Eurogroup, said the eurozone finance ministers would be "favorably disposed" to a request by Greece for extending the program into next year.

A new line of credit became urgent after Athens proposed in October to break free completely of financial oversight by its international creditors, including the EU Commission, the European Central Bank (ECB) and the International Monetary Fund (IMF). The proposed move, however, sent ripples through financial markets, sending Greek borrowing rates to dangerously high levels.

But a new credit line for the debt-laden eurozone country would require the previous bailout to be completed or terminated.

On Sunday, parliament in Athens passed a controversial government budget for 2015, which the country's creditors regard as based on too optimistic growth and deficit figures.

In spite of the skepticism, Greece is now set to receive the final 1.8 billion euro installment of its huge bailout this month. Since 2010, the country has received a whopping 240 billion euros ($294.8 billion) in rescue loans.

The green light from eurozone finance ministers for a temporary extension to Greece's bailout program will require fast track approval by member state parliaments before the end of the year.

Greece is seeing the green shoots of recovery and insists on exiting its international bailout program. But creditors are skeptical and they're calling for more austerity. (08.12.2014)

Greece's parliament has passed a budget for 2015 that projects economic growth and a reduced deficit. As lawmakers voted, anti-austerity demonstrators protested outside. (08.12.2014)

The fight by governments against alarmingly high unemployment in the eurozone has so far failed to yield tangible results. The latest figures showed sluggish growth in the bloc had been a curse for the labor market. (28.11.2014)