Eurotunnel has reported the best annual result in its 20-year history, tripling its profit on rising numbers of vehicles carried on its truck shuttle service under the Channel between Britain and France. 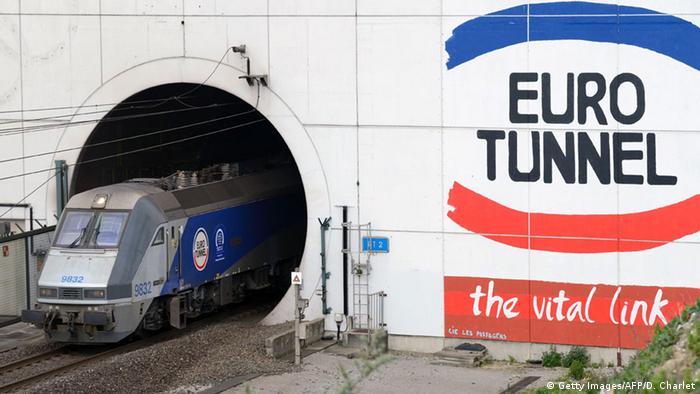 The growth had been driven by transports of 2.66 million tourist vehicles and 1.64 million trucks, the company said Wednesday, offsetting falls in cargo services and Eurostar passenger numbers by three percent and four percent respectively due to terrorism fears.

"It's the best year we've ever had at the Eurotunnel group since the opening of the tunnel," chief executive Jacques Gounon told reporters. All of the company's three core businesses - the Eurotunnel shuttle services, the ElecLink electricity connector purchased

Hundreds of billions of euros worth of goods are transported through the French port of Calais every year. But a migrant crisis and striking port workers have made business for freight operators there much harder. (04.08.2015)

A workers' strike over job cuts in the French port of Calais has turned chaotic and shut down traffic between France and England. Illegal immigrants used the opportunity to try and board trucks bound for England. (23.06.2015)

in the previous year and the Europorte rail freight business - had outperformed their sectors, he added.

Opened in 1994, the Channel Tunnel carries passenger vehicles and freight trucks on trains under the sea linking England and France, as well as Eurostar passenger trains connecting London with Paris, Brussels and other points in Europe.

Since its opening, the Eurotunnel business has been struggling as traffic and financial assumptions proved over-optimistic. In 2007 it was forced to restructure its business, but was dealt additional blows in the years later by the economic downturn and traffic disruptions from migrants seeking to cross the Channel on its trains.

Rail freight tonnage through the tunnel, for example, fell 27 percent in 2016, with Eurotunnel attributing that partly to operators' rerouting some services because of the migrant incursions.

Improved security around the group's Coquelles terminal in France since late 2015 had eliminated disruptions, the company added.