Europe′s Rich-Poor Gap Smaller Than America′s | News and current affairs from Germany and around the world | DW | 22.05.2008

According to a new social report issued by the European Commission, the gap in income between the rich and the poor in the EU is slightly less than that in the United States. 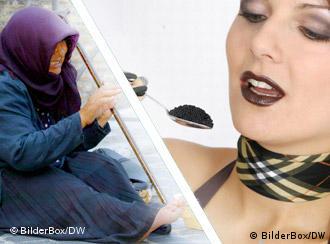 However, the gap between the rich and poor in Portugal, Poland, Lithuania and Latvia is greater than that in the United States, according to the commission report.

The report shows that those most at risk of falling into poverty in the EU are single parents, the retired, the unemployed and families with only one income. The report also shows that the risk of poverty is twice as high for people born outside the bloc who now live in the EU.

There is also a marked difference in educational opportunities within the EU.

In Germany, children of parents with low educational standards have a good chance of reaching higher education levels while children of graduates in Germany have twice as much chance to go further in their studies.

However, the gap in most other EU countries is more evident with fewer children from families with a lower educational standard making it into higher education.

One aspect remains standard throughout the EU, the report says, and this is that a person's background remains an important factor in getting access to education and job opportunities.

One in Eight Germans Lives in Poverty

One in eight Germans lives in the poverty and the divide between rich and poor is growing, according to a new government report. The labor minister said that's evidence Germany needs a minimum wage. (18.05.2008)

When German President Horst Köhler gave his second "Berlin Address" on Monday, Oct. 2, he surprised many with statements that sounded positively left-leaning for a member of the conservative Christian Democratic party. (02.10.2007)