In a dubious anniversary, authoritarian leader Alexander Lukashenko marks 20 years as Belarus president. How has Europe's last dictator managed to stay at the helm of the eastern European country for so long? 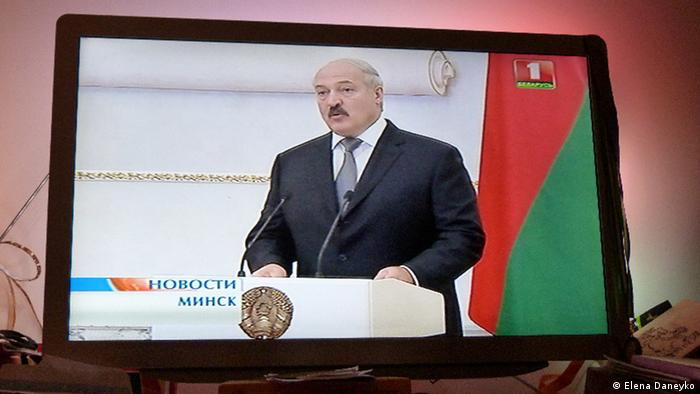 20 years ago, hardly anybody thought that the West would one day refer to Alexander Lukashenko as "Europe's last dictator". Neither politicians nor political observers had foreseen his victory in the presidential elections on July 10, 1994. More than 80 percent of voters in Belarus allegedly voted for him at the time.

Lukashenko, who headed a state-owned agricultural firm at the time, first ran for a political office in the parliamentary elections in 1990. As a member of the Supreme Soviet of the Soviet Union, the highest legislative body of the Soviet Union, he would sometimes side with the Communists and sometimes with the Nationalists. Lukashenko chaired the committee for the fight against corruption. In angry speeches he would regularly attack representatives of the communist nomenclature, the government's backbone at the time. It gained him widespread popularity with the general public.

Observers say his victory in the 1994 presidential elections was largely the result of a protest vote. Voters had grown tired of the communist regime, of hyper inflation and other economic problems. But not even the supporters of the 39-year-old new president would have predicted that Lukashenko would go on to stay in office for this long.

But what is the secret behind Lukashenko's political longevity? Belarusian political scientist Alexander Klaskovsky believes it's a mixture between Lukashenko‘s populism and the low demands by voters in Belarus. Most people, he said, are satisfied with their relatively stable living standards – even if they lag far behind western European standards. "Their jobs are guaranteed. They live in a remake of Soviet life where you don't have to work and think hard," Klaskovsky told Deutsche Welle in an interview. 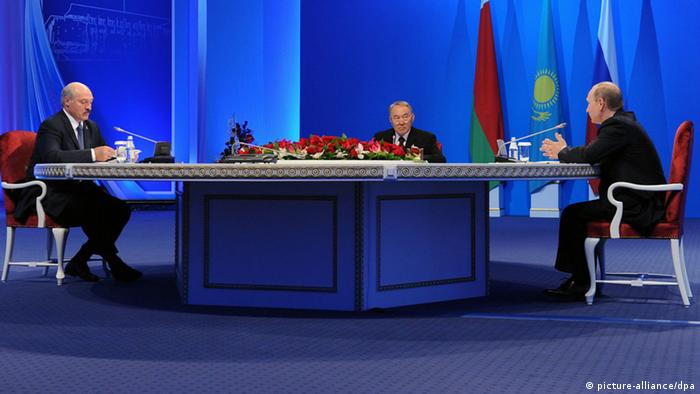 Russia, Belarus and Kazakhstan founded the Eurasian Economic Union in May 2014.

But tremendous financial support from Moscow is the crucial key to Lukashenko's success, the political scientist added. According to estimates by Belarusian experts, direct and indirect subsidies amount to up to ten billion US dollars (7 billion euros) per year. Minsk benefits from low energy prices and trade perks. Belarusian refineries process oil delivered by Russia. The largest share of exports from Belarus go to Russia. Minsk is hoping to benefit from further customs reductions and additional revenue of three to four billion US dollars per year through the Eurasian economic union between Russia, Belarus and Kazakhstan.

Klaskovsky also pointed out that this year alone, Belarus will have to pay back more than three billion US dollars to its creditors. The Kremlin has been the only possible partner for outside financing activities so far. Lukashenko is not willing to implement political and economic reforms, so collaboration with potential western partners is not an option. "Minsk‘s access to the International Monetary Fund's financing programs is therefore extremely limited," said Klaskovsky.

The power of fear

Valery Karbalevitch from the Belarusian research center 'Strategia' also stressed the tremendous financial, economic, political and military support from Russia. Lukashenko's regime would not survive without this help, he said. "Add to this oppression and even elimination of regime critics. It has meant that many politically active people have left Belarus," Karbalevitch told DW.

Stanislav Shushkevitch, who was the first head of state in independent Belarus, pointed out how Lukashenko destroyed the young democracy in the first two years of his reign. "First the media was monopolized and then local self-administration was abolished."

That created an atmosphere of fear that the current regime is still based on, said Michail Pastuchov, who used to be a judge at the country's first constitutional court. "The foundation of the current system in Belarus is fear. They keep trying to make it clear to people that every expression of dissatisfaction will be brutally quashed," said Pastuchov. 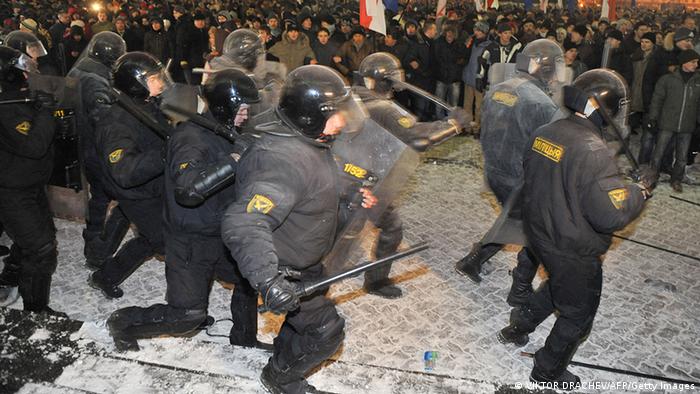 After the presidential elections in late 2010, Lukashenko had anti-vote rigging protests violently quashed in Minsk.

Will Lukashenko exploit the crisis in Ukraine?

Political observers say the current crisis between Russia and Ukraine is further spreading fear in Belarus, within both the government and the population. They say Lukashenko is aware of the threat from Russia. At the same time, he considers the Ukraine crisis a new asset in his hands that can help him further consolidate his power, said Valery Karbalevitch.

People in Belarus are scared of change, the social scientist believes. State-controlled media have long spread the message that the political opposition in Belarus would only bring chaos, anarchy and even war to the country if they were to take over power. Lukashenko's slogan for the 2015 presidential election campaign goes along those lines. "Either Lukashenko and stability, or change and chaos." Karbalevitch added that Lukashenko‘s situation ahead of the presidential elections would be more uncomfortable than it is now if it hadn't been for the events in Ukraine.

It's not the Eurasian Economic Union that's a danger to Europe, but the Eurasian ideology behind it, writes DW's Ingo Mannteufel. (29.05.2014)

Political scientist Kai-Olaf Lang tells DW that the Baltic states are worried about further territorial claims by Russia. Their defense plans are already on the table for the worst case scenario. (23.03.2014)