Europe′s far-right vows to push referendum on Turkey′s EU accession | Europe | News and current affairs from around the continent | DW | 23.10.2010

Since 2005, Turkey has been in membership talks with the European Union - with little success. Far-right parties now say the country poses a threat to EU identity and are planning a referendum to block Turkey's EU bid. 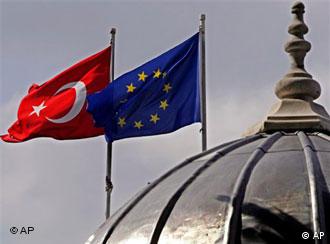 Europe's far right say Turkey could bring down the EU

Several far-right European parties have vowed to seek a Europe-wide referendum on Turkey's accession to the European Union.

That was the conclusion of a two-day meeting in Vienna between the Austrian Freedom Party, Belgium's Flemish Interest Party, the Sweden Democrats, the Danish People's Party and others, concerning the "EU's situation after the Lisbon Treaty."

The focus of the meeting landed on Turkey's bid for EU accession. Turkey began EU membership talks in 2005, but has not come far due to its disputes over EU-member state Cyprus - and resistance from other EU members such as France and Germany.

Right wing fears the 'end of the EU' 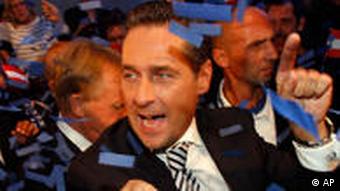 Still, Austrian Freedom Party chief Heinz-Christian Strache warned against letting the country into the European bloc, vowing that his party and its counterparts would put together a Europe-wide citizen's initiative to block Turkey's accession.

Strache told reporters that Europe would be headed down "a dramatic wrong path" if "non-European countries" were accepted into the EU.

"That would be the end of the European Union and the beginning of a Eurasian-African Union that would completely go against our European peace project and must therefore not be allowed," he added.

The EU's Lisbon Treaty, which came into force in December 2009, laid the groundwork for a so-called European Citizens' Initiative, which would require the European Commission to give consideration to issues brought forth by petitions of one million European citizens. However, the procedures necessary for such an initiative have not yet been set into law.

The idea of Turkey joining the EU continues to be an uncomfortable one for many in the bloc. British Prime Minister David Cameron has thrown his support behind Turkey's bid, setting the UK apart from France and Germany. (28.07.2010)