The Economist is one of the latest influential publications to support Democrat Barack Obama in the US presidential election. DW-WORLD takes a look at what it and other media have said in the campaign's final hours. 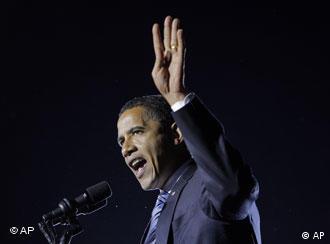 "It's time," the Economist's cover said

The British business weekly, The Economist, has "wholeheartedly" endorsed Barack Obama, saying the Democratic candidate has "clearly shown that he offers the better chance of restoring America's self-confidence."

The magazine admits it was disappointed that the John McCain on the campaign stump has been a weaker, more indecisive and more right-wing version of the John McCain who made a name for himself as a senator. His choice of Sarah Palin as a running mate was the epitome of the "sloppiness" exhibited by Candidate McCain, The Economist says, writing: "It is not just that she is an unconvincing stand-in, nor even that she seems to have been chosen partly for her views on divisive social issues, notably abortion." Rather, the magazine deplores the fact that McCain made his most important appointment after meeting Palin only twice.

In contrast, The Economist commends Obama for running an exceptionally assured campaign. "A man who started out with no money and few supporters has out-thought, out-organized and out-fought the two mightiest machines in American politics -- the Clintons and the conservative right," the magazine opines, concluding that Obama deserves the presidency.

The French paper Dernières Nouvelles d'Alsace from Strasbourg conceded that for months now, Europeans have only had eyes for Barack Obama. "That's because he stands for real change, but also because McCain wears the Republican banner that -- perhaps unfairly -- puts him on equal footing with the incumbent president," the paper wrote. It added that what Europeans are expecting is an end to the Bush era, and an end to eight years of lack of understanding between the United States and the rest of the world.

The world would be better off with Barack Obama as the next US president, said the Dutch De Volkskrant newspaper in its weekend edition. "Everything points to the fact that diplomacy plays a far bigger role for him than it does for the incumbent president, and that he would handle it with far more aplomb," the paper wrote. It also echoed a popular European view that with Obama in the White House, America would show the world a completely different face in every respect than it has with the much-vilified Bush, or the respectable but somewhat rusty veteran McCain.

The Luxemburger Wort focused on the foreign policy tasks facing the winner of the election. "The leader of the United States can and should give decisive impulses for peace in the Middle East, for the future vitality of NATO, for a new order of the world's financial systems, and for the West's energy security," the paper said, adding that the president of the free world must also ensure that international terrorism is fought with the right weapons.

The German Rhein Zeitung commented that after eight disastrous years of the Bush administration, it doesn't really matter who becomes the 44th president -- things can only get better. Whether the victor is Obama or McCain, the "chief firefighter" will have several blazes to attend to, the paper wrote, adding: "He'll have to repair his country's damaged reputation worldwide, and give Americans a new sense of optimism."

Finally, the Swiss Tages-Anzeiger newspaper warned its readers not to put too much faith in national opinion polls which put Obama ahead of McCain in the final hours of the campaign. It said that the polls are treading exceptionally thin ice this year because the favored candidate is an African American.

"Did white voters not want to admit to their prejudice and say they were supporting a black man, only to then choose the white candidate in the privacy of the voting booth?" the paper asked. And anyway, it continued, with the election likely to come down to a handful of swing states, a healthy dose of skepticism is justified.

The economy, taxes and America's image are hot-button issues for US expats in Germany. But even Republicans are now going Democrat for a far more compelling reason: Fear that Sarah Palin could become president. (02.11.2008)

Opinion: Obama Will Go Down in History

If Barack Obama is elected, the US will wake up to a dramatically different government on Nov. 5, says American Council on Germany president William Drodziak. Despite a tough agenda, Obama will show he's turned the page. (30.10.2008)

US Readers Divided by Europe's Approval of Obama

Most Europeans would likely vote for Barack Obama if they could, but some DW readers in the US are divided on whether they'd really like him. (29.10.2008)