Reaction to the impact of the G20 summit was mixed in the European media. Some editorialists praised the summit as a historic and others said it was long on rhetoric and short on specific practical solutions. 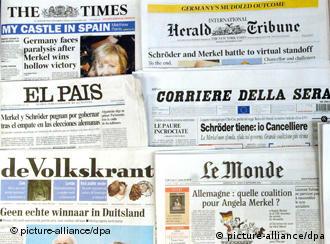 The European media was divided over the results of the G20 weekend summit in Washington, with some newspapers optimistic and others more skeptical about the goals set out at the gathering of leaders from the world's largest economic powers can be achieved.

According to Germany's Sueddeutsche Zeitung, the success of the summit "remains an open question." The daily broadsheet highlighted what it characterized as a "huge transatlantic divide on how to achieve new financial structures for the 21st century." The paper pointed out, "On one side there was France's Nicolas Sarkozy with his grandiose plans for regulating the international financial markets and on the other side -- the Americans, along with possibly the British, concerned about the role of New York and London as the world's leading financial centers, who could be opposed to some necessary reforms." The Munich-based newspaper was cautious about what to expect from the summit, "Much hope is invested in US President-elect Barack Obama, who has assembled an extraordinary team of economic advisors. Still one should not expect too much when the next world financial summit convenes at the end of April in London -- roughly 100 days since Obama would assume office." 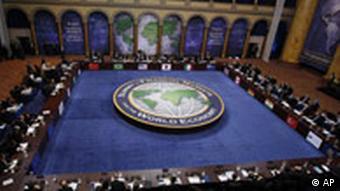 The right nations were at the negotiating table, some papers said

Germany's Frankfurter Allgemeine Zeitung praised the summit as a "first step on the way to a new world financial order," adding that "important industrial and emerging economies all committed themselves to an improved global framework for reforming the financial markets. This is no small achievement." The daily warned, however, against overregulation of the financial markets, saying that the global framework in place should prevent the financial markets from falling into the abyss again. In the paper's view, regulation should open enough not to stifle innovation and free capital flows of a market economy. "It is critical to differentiate between absolutely essential regulation and superfluous reforms," according to Monday's editorial.

German daily Die Welt was optimistic, characterizing the summit as a "historic gathering of 20 of the world's most important economies to put together a detailed road map for the new financial order." The daily also praised the world leaders for their "commitment to open markets and determination to renounce protectionist measures." 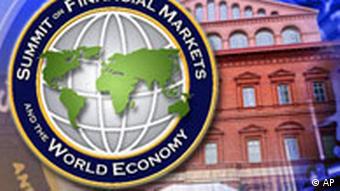 The French newspaper Le Monde said in its Sunday edition that the world leaders had agreed to "declarations of principle," leaving the hard implementation of the reforms to their finance ministers, and also emphasized the need for Western nations and the emerging countries such as China and Brazil to find global solutions to the collapse of the world financial markets, putting the onus on politicians to provide leadership. "The world awaits much from this summit," the paper commented. "If the world's political leaders don't manager to deliver on their promises, one has good reason to denounce their lack of resolution."

Spain's El Pais called the summit the "first necessary step, though still modest, to reforming the world financial architecture." The paper went on to describe the meeting as "serious and urgent," but added that it was too short on specifics and proposed only "generic principles to reform the financial system and very general lines of economic action."

An editorial in the Monday edition of the Swiss daily Neue Züricher Zeitung was scathing and characterized the outcome of the summit as "full of huge and empty words." It took issue with the remarks made by German Chancellor Angela Merkel, who said "all market participants, all products and all markets ought to be stringently supervised and regulated." The newspaper postulated "How then? Are there any guarantees in the future that nation-states would not collapse? And would financial breakdown of the state be any less catastrophic than collapse of the market failures?"

Finally Italy's La Repubblica's dramatic headline called the G20 gathering a "summit of lies." and called into question the leaders' promise to seek coordinated growth. "The only clear signal from this G20 was the acceleration of the birth of a new world order," the Italian paper said, noting that the only participants that held the financial reserves to take part in re-launching the International Monetary Fund were Saudi Arabia and China.

European leaders said the emergency finance summit in Washington was a success, even though the resulting action plan was less drastic than some of their original suggestions. (16.11.2008)

At the emergency summit in Washington, G20 leaders agreed to tighten regulations and increase transparency of the financial markets. But that's not the only reason the meeting was a success, says DW's Michael Knigge. (16.11.2008)

The world's emerging economic powers came out of the historic financial summit in Washington emboldened by their new role in fixing the global economy. (16.11.2008)