Far-right French presidential candidate Marine Le Pen has been stripped of parliamentary immunity. The move allows a Paris court to prosecute her for posting images of "Islamic State" (IS) brutality on Twitter in 2015. 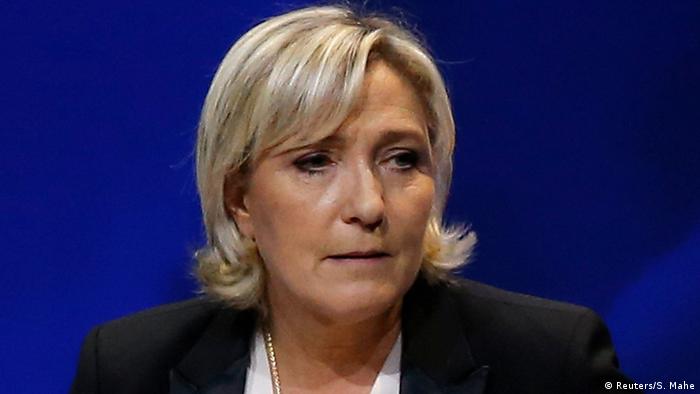 Members of European Parliament voted by a show of hands on Thursday to strip far-right French lawmaker and presidential candidate Marine Le Pen of her parliamentary immunity for tweeting graphic images of victims of the so-called "Islamic State" (IS) extremist group.

"I think the results are clear - a broad majority is backing this," said the EU lawmaker chairing the plenary session.

The lifting of the populist's parliamentary immunity- which is intended to protect EU lawmakers against intimidation attempts - now permits a Paris court to prosecute Le Pen for posting three images of IS brutality on Twitter in 2015.

Her tweets included a photo of James Foley, a US journalist who was decapitated by the militants.

The offense being considered is "publishing violent images," which under certain circumstances can carry a penalty of three years in prison and a fine of 75,000 euros ($78,930.00).

Head of the right-wing National Front (FN) party, Le Pen is currently the front-runner to win the first round France's presidential election.

According to the latest opinion polls, however, Le Pen would likely lose in the May 7 run-off to either conservative Francois Fillon or independent liberal candidate Emmanuel Macron by some 20 percentage points.

Le Pen isn't the only candidate to have been hit by scandal during the French election campaigns, however, with Fillon still refusing to pull out of the presidential election despite being summoned by magistrates over his "fake jobs" scandal.

A tongue-in-cheek petition to recruit the former US leader to run for French president has amassed thousands of signatures during a lackluster campaign season. The Parisians who launched it want a political sea change. (01.03.2017)