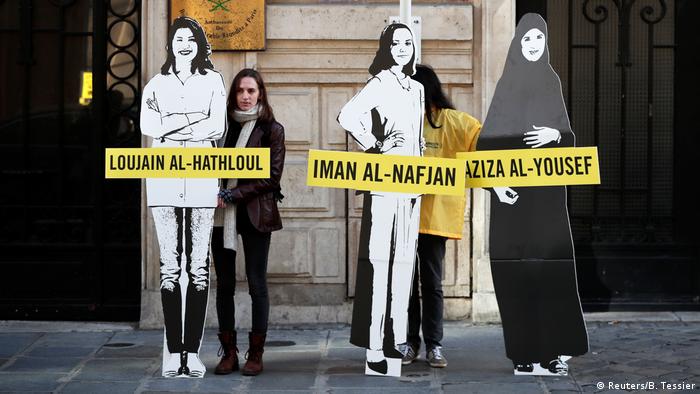 More than 120 MPs signed the document. Fifty-one of them were German MPs from different sides of the political spectrum.

In the letter, European legislators reiterated their call for Saudi authorities "to immediately and unconditionally free all women targeted for their human rights activism."

The letter celebrated that "following sustained international pressure," all of the female activists who had been arrested in a major crackdown in 2018 were no longer in prison. These included prominent activists Samar Badawi, Nassima al-Sadah and Loujain al-Hathloul.

But EU MPs decried the heavy restrictions and curtailment of basic rights the women have been subjected to since their release.

"These measures constitute further violations of their fundamental rights, including free movement and association and free speech, and ostracize activists at the critical threshold of starting a new life after release from prison," the letter read.

Loujain al-Hathloul, known for defying the ban on women driving in Saudi Arabia and for opposing the Saudi male guardianship system, currently still faces three years of probation and a five-year travel ban.

Saudi reforms are not enough

Parliamentarians acknowledged that Saudi authorities had gotten rid of some of the restrictions that women face in daily life.

In 2018, Saudi women were granted the right to drive a vehicle alone and obtain a driver's license. The following year, the country allowed adult women to obtain passports and travel without the permission of a male "guardian."

But still, the MP's denounced the country's repressive system, saying it continued to harm women.

"These efforts, however, are insufficient, and the male guardianship system as well as disobedience laws continue to negatively affect all aspects of women's lives," the letter read.