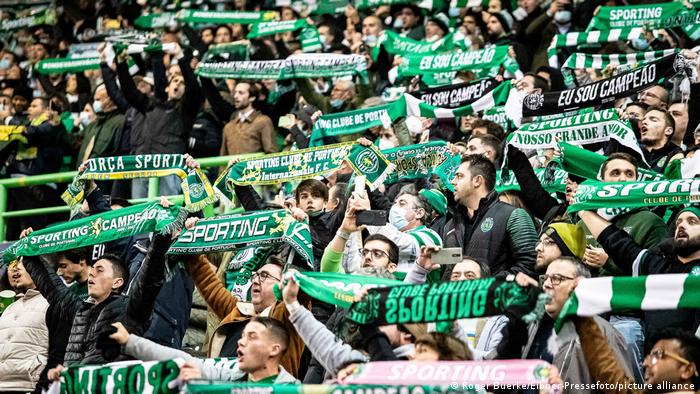 "Well, that's it. See you next year," said one Borussia Dortmund supporter leaving the Estadio Jose Alvalade after seeing his team crash out of the Champions League following a 3-1 to Sporting Lisbon.

It wasn't just Dortmund's last Champions League away match; for some of the traveling fans, it was likely the last game they would attend this year in any competition.

Dortmund may be known all over the world for their famous Yellow Wall, but this season many of the fans who are responsible for that atmosphere haven't been attending Bundesliga matches due to pandemic-related restrictions.

Indeed, the game in Lisbon was only the third this year where all of the club's hardcore ultras were present. But with infection rates rising again in Germany, it's likely to be the last as attendance restrictions and additional measures return at large cultural and sporting events in the country. 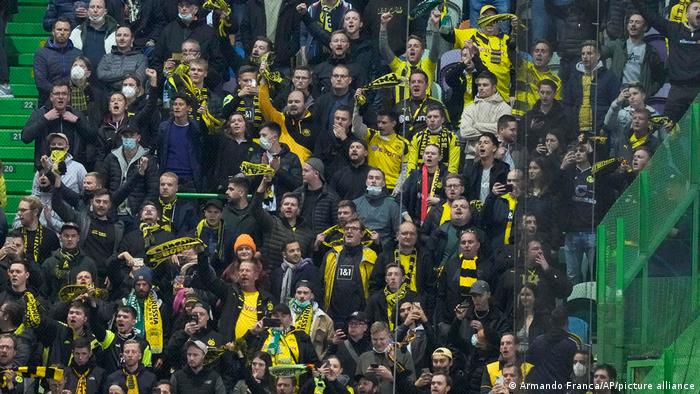 In the Bundesliga, that could mean reduced capacities, a temporary ban on standing places and personalized tickets matched up to identity cards, to enable contact tracing. And that means some hardcore fans will once again stay away.

The ultras have generally accepted that the measures are necessary to combat the virus in the short term, but they won't attend games under such circumstances in order to avoid giving any impression that such conditions can ever be normal — or, even worse, permanent.

The seven-day infection rate back home has topped 400 per 100,000 people, and some regions are even back in semi-lockdown mode. But traveling Dortmund fans in Lisbon were able to put those worries aside for a day as they enjoyed the autumn sunshine in a city with less than half that infection rate at 189 per 100,000.

Having vaccinated 87% of its population against COVID-19, Portugal has one of the highest inoculation rates in the world. Neighbors Spain are also performing well at 80%, contributing to a seven-day incidence rate of less than 100.

In Germany, on the other hand, the vaccination rate has stalled at around 68%, in line with the European Union average but still far enough behind Spain and Portugal for the Frankfurter Allgemeine Zeitung to declare an "Iberian vaccination miracle" and for Focus magazine to describe the peninsula as a "corona oasis."

In Villarreal, Spain, on Tuesday night, this writer was at a sold-out Estadio de la Ceramica for the visit of Manchester United, whose own home games at Old Trafford have been at full 73,000 capacity this season.

In Portugal, most restrictions have been lifted, with restaurants and bars fully open again since October. Masks are still obligatory on public transport and in supermarkets and shops, but Sporting CP, one of Lisbon's two big football clubs, were still able to welcome a near-capacity 41,000 crowd against Dortmund with no social distancing. 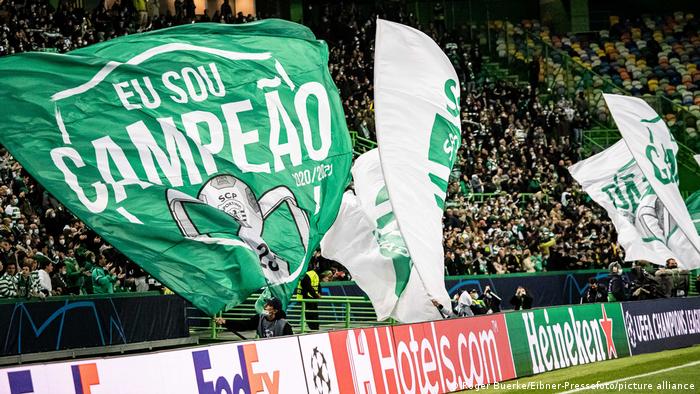 Stadiums in Portugal have remained packed this year, thanks partly to a strong vaccination rate

"Our stadiums were closed for almost a year," said Sergio, a fan of Sporting's local rivals Benfica. "I tried to meet friends to watch the matches in bars or cafes because football is all about the social aspect, but, at some point, even that was no longer possible."

Now, Sergio is looking forward to the Lisbon derby between Benfica and Sporting on December 3 taking place in a full stadium. "Hopefully," he said. "But I'm still a bit worried because the infection rates have started rising slightly again here as well."

"We struggled when the stadiums were empty because our usual customers had no reason to buy new clothes during the pandemic, because they were just watching the games at home," he told DW. "But now it's getting better and tourism is increasing again, too."

No end in sight in Germany

Meanwhile in Germany, football fans are facing a very different prospect. In Bavaria, Bayern Munich are once again reducing stadium capacity to 25%. In Saxony, RB Leipzig will play their next three home matches with no fans at all, as regional authorities move to combat rising infection rates.

It's not just the fans who are affected; COVID-19 cases are on the rise among players and coaches, too.

On Wednesday, Bayern Munich midfielder Joshua Kimmich, who admitted recently he wasn't vaccinated against COVID-19, tested positive, as did striker Eric Maxim Choupo-Moting. Both were already in quarantine with teammates Jamal Musiala and Serge Gnabry and all missed Bayern's Champions League game away at Dynamo Kyiv on Tuesday.

According to local media, Musiala and Gnabry have since received a first dose of the vaccine.

Similarly, RB Leipzig head coach Jesse Marsch and goalkeeper Peter Gulacsi missed their team's away game at Club Brugge in Belgium after testing positive. Marsch is reported to be double-vaccinated, and RB has claimed their entire squad is, too.

At Borussia Dortmund, head of professional football Sebastian Kehl confirmed last month that the entire first team squad is either vaccinated or has recovered from COVID-19. "The lads have understood their responsibly," he said at the time.

There should be no more coronavirus-related absences on the pitch at Dortmund, but the same cannot be said for the supporters who packed the away end in Lisbon.

For some, it may have been their last game for a while. They'll be hoping that the situation has improved by the time their team returns to European action in February — albeit in the Europa League.