British director Stephen Daldry and Swedish actor Alexander Skarsgard were among the celebrities attending the 28th annual European Film Awards. But British actor Sir Michael Caine was the superstar of the night. 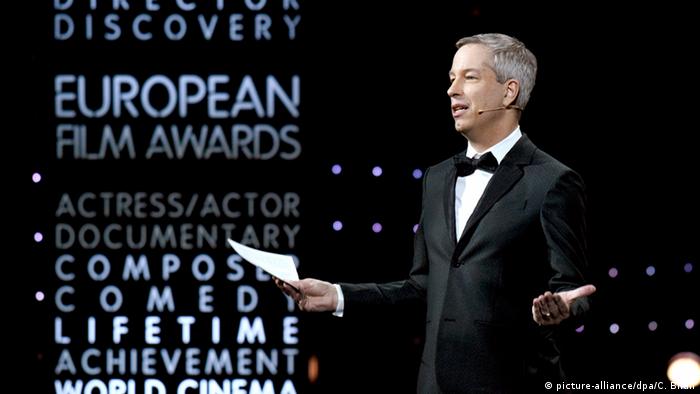 The award ceremony opened with a piece of music described by German presenter Thomas Hermmans as the oldest piece of written music - a tune from ancient Syria. It followed on the heels of Charlie Chaplin's famous "I don't want to be an emperor" speech from his 1940 film "The Great Dictator," setting the scene for the political undertones to be expected for the evening.

"I spent a big part of my life in totalitarian regimes. I don't want them to return. The films we make cannot be separated from the world we live in. Our duty is again to defend freedom and democracy," Holland said. 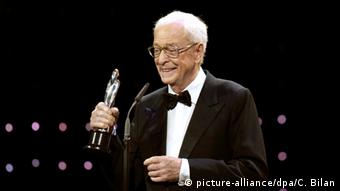 German actor Daniel Brühl also took to the stage later in the evening - not to present an award but to highlight the political challenges faced by people in the film industry, focusing on Ukrainian director Oleg Sensov, who is serving a 20-year prison sentence for Russian allegations saying he had supported terrorist networks.

A total of 52 films from 36 countries were nominated by the European Film Academy.

The Italian comedy "Youth" won the "European Film 2015" award. Featuring Sir Michael Caine, Harvey Keitel, Rachel Weisz and Jane Fonda, the movie follows a number of retired friends, who travel to the Swiss Alps, where they are compelled by a series of events to reflect about themes of youth and aging.

The award for the best documentary was presented to the British film director Asif Kapadia for his film "Amy" based on the life of singer Amy Winehouse.

The European Discovery Award, given to promising debuts in the film industry, was awarded to the movie "Mustang" by Deniz Gamze Ergüven, who dedicated her award to Can Dündar - a recently incarcerated Turkish journalist.

Several of the winners had already been announced ahead of the event, including British actor Sir Michael Caine, who was presented with the Honorary Award of the European Film Academy President and Board.

According to the European Film Awards, Caine has provided "some of cinema's most unforgettable experiences" throughout his career, which has spanned over six decades to date. EFA President Wim Wenders and EFA chief executive Agnieszka Holland stressed that the award to Cain had been "long overdue." Wenders added that it was "a sheer pleasure to present this award" to Michael Caine.

Caine also won the award for European Actor, taking to the stage three times in total.

British actress Charlotte Rampling was also presented with a Lifetime Achievement Award. The 69-year- old actress said that she was proud of the award, as the European film industry played an important role in her life.

"I grew up in Europe. I never planned to go to Hollywood. Europe is my motor, it's my language," Rampling said, before receiving her award from French director Francois Ozon. Later in the evening, Rampling garnered another award as "European Actress."

Austrian Actor Christoph Waltz was also given an honorary award for European Achievement in World Cinema.