The European Commission on Friday unveiled a plan to introduce more flexibility in the Stability and Growth Pact, saying it was vital to restore the credibility of its much-flouted budget discipline rules. 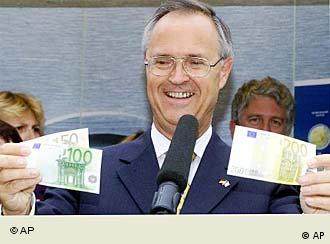 Germany insisted on the pact when the euro was launched

With roughly half the European Union countries among the 12-member euro zone set to exceed EU public deficit limits this year, the European Commission said Friday it wanted to be more flexible in how it enforces the budget rules underlying the common currency.

"It is my firm belief that these proposals will provide for a stronger and more credible pact," Commission President Romano Prodi said in a statement. He added the rewriting of the rules aimed to "strengthen and clarify" the oft-violated pact, which imposes a deficit cap of 3 percent of gross domestic product.

At the same time, Prodi said the pact "continues to be indispensable for the stability of the euro and for the health of the European economy."

Critics of the Stability Pact describe it as a straitjacket, and argue that reforms are necessary to give nations such as Germany, a country struggling with soaring unemployment and stagnant growth, enough room to finally revive their ailing economies.

Last year, the pact suffered a major blow when France and Germany -- the euro zone's two largest economies which have violated the deficit ceiling three years in a row -- managed to avoid disciplinary action much to the ire of smaller countries, some of which have bent over backwards to follow the rules.

Both Paris and Berlin argued that further belt-tightening and the pact's one-size-fits-all philosophy would stifle any hope of economic recovery.

This week, Germany estimated its 2004 budget deficit at 3.7 percent of GDP -- clearly above the pact's ceiling -- but pledged to meet the criteria in 2005.

The new changes will keep the current deficit cap -- three percent of GDP -- and a target total debt to GDP ratio of 60 percent, but will introduce greater flexibility when deciding what to do with countries that breach the rules.

Enforcement would also be more country-specific, for example by giving those facing periods of "exceptionally weak growth" more time to get their budget deficit under control.

"We have to find a balance between equal treatment for all and a certain amount of adaptablility to the specific situation of each country," EU Economic and Monetary Affairs Commissioner Joaquin Almunia said, adding the proposals would introduce more "economic rationale in the implementation."

At the moment, euro zone states are permitted a budget deficit exceeding 3 percent only in the event of a severe recession. In the future, the European Commission will also bear in mind a country's total debt load when assessing the condition of its public finances.

Prodi stressed that the priority was to help Europe out of its economic doldrums. "The overriding objective is to strike a better synergy between growth and fiscal discipline," Prodi said. "The proposals present a credible compromise between economic soundness and the political realism."

In Berlin, German Finance Minister Hans Eichel expressed strong support for the proposals. "This is what I have demanded the whole time," he said. "To apply the stability and growth pact only to the letter of the law makes no sense."

The new proposals are expected to be discussed by EU finance ministers later next week. Eichel said he excepted them to be adopted by "a big majority."

Germans praised and criticized the decision by EU finance ministers to give Germany more time to fix its budget. The government hailed it as a way to spur job growth, the opposition called it a "black day for Europe." (Nov. 24, 2003)