Hundreds of taxi drivers from across Europe have jammed central Brussels in a protest against Uber car-sharing service. The cabbies see the controversial ride-sharing app as a threat to their livelihoods. 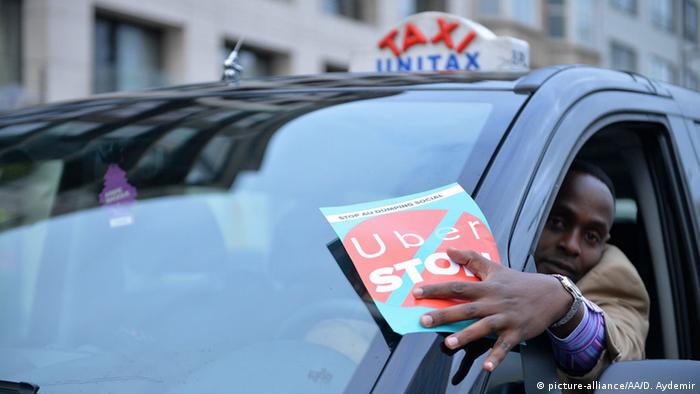 Hundreds of taxi drivers with beeping horns drove their vehicles through the Belgian capital towards Schuman roundabout on Wednesday, hoping to meet the EU officials.

Some drivers came from as far as Spain, France and Switzerland to take part in the demonstration against Uber. Transport union FGTB-UBT said about 1,200 taxis from all over Europe took part in the protest, but the Belgian police said the number was not more than 400.

"We come from Madrid, Barcelona, to defend a Europe free from Uber," Concha Guardado, a cab driver from Spain, told the AFP news agency. 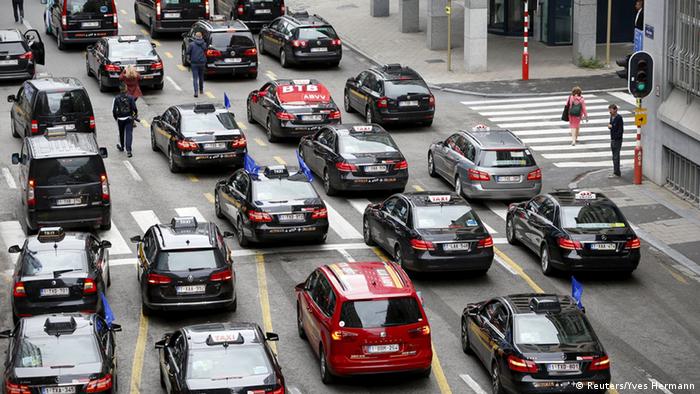 Transport union FGTB-UBT said about 1,200 taxis from all over Europe took part in the protest

UberPop, a ride-hailing app, allows customers to hire rides with people operating their private cars - at prices far below the cost of a conventional cab. Cabbies complain that UberPop drivers can undercut them due to much lower costs as they are not subject to the 250 hours of mandatory training that they have to undergo to get their licenses, nor are they required to carry the same insurance. This has also prompted some government officials to express concerns about the safety of passengers using the service, which was first introduced in the United States but now operates all around the world.

Uber launched its licensed service UberX in the Beligan capital two weeks ago. The unlicensed UberPop, which was earlier banned in France, would not be suspended, according to the company.

"Since Uber has been on the market, my income has gone down by 30 percent," said Michele Kaiser, who has been driving taxis in Brussels for more than 30 years. "We are waiting for Uber's activity to be legally clarified, but nothing is happening," she told DPA news agency.

Wednesday's protest created severe traffic jams in Brussels, forcing some air travelers to walk on foot to the airport, a distance around one kilometer from the protest area, according to the Belga news agency.

The drivers drove with banners including, "This is not an illegal taxi" and "No to the 'uberization' of our profession" on their taxis.

"They [Uber drivers] pay no charges, they have no social security, they are not even insured for transporting people," said Ben Deniro, a cabbie from Paris.

But the driver-hailing app believes Uber is the future of passenger commuting.

"Uber is about keeping cities moving - connecting people to safe, reliable and affordable transport at the tap of a button. These threats, by a small number of taxi drivers, only underline why people are increasingly choosing alternatives like Uber," said a company spokesman.

According to a survey published on Tuesday by Belgian newspaper "La Libre", pollster Dedicated and public broadcaster RTBF, only seven percent of Belgians think the car-sharing service should be banned.