Moscow’s plans to restrict NGOs are being called harmful to democracy, even though a report that Russia had banned a German aid agency turned out to be false. 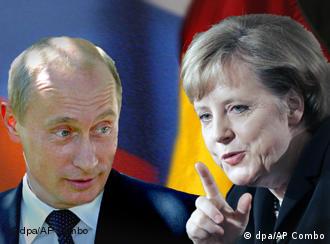 Since Vladimir Putin adopted a controversial law giving his government more control over non-governmental organizations (NGOs) operating in the country, complaints that the Russian president is throttling his country’s fledgling democracy have become louder.

The legislation, which Putin signed on Jan. 10, imposes tight restrictions on the financing, registration and activities of NGOs. An original version of the law was toned down to give international NGOs more freedom, so the move is likely to affect Russian aid organizations the most.

Still, along with recent clampdowns on press freedoms, the move is widely seen as another way for Putin to exert control over the population, and fend off protests – or even another “color” revolution -- in ex-Soviet republics. Ukraine’s famous orange revolution in 2004 led to the election of a government that was not supported by the Kremlin. 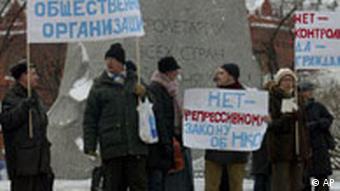 The law will “severely undermine the sovereignty of Russian and foreign NGOs by imposing heightened surveillance and re-registration procedures,” according to material published by the European nonprofit umbrella organization, the EU Civil Society Contact Group, or CSCG. The CSCG protested the Russian law in letters to the European Commission, the European Parliament and to the EU president.

In primarily targeting organizations that work in conflict areas like Chechnya, “he is using the umbrella of counter-terrorism to his ends,” Wilkins said.

Move at odds with international role

Such a crackdown is especially problematic because Putin is taking on the chairmanship of the G8 this year, Wilkins added.

“He has done himself a disfavor by attacking the NGOs when he is trying to build a reputation for Russia as a global player, and a partner in the fight against terror, against the proliferation of nuclear arms and for the stability of energy supplies,” he said.

Russia is one of Germany’s major trading partners (Russian-German trade rose 40 percent last year to $32 billion, about 24 million euros). It supplies 30 percent of the country’s gas, and is a needed ally in nuclear dealings with Iran. That means while the European press has loudly attacked Putin’s strong-arm tactics against democratic freedoms, politicians have often had little room to maneuver.

Help provides on the Chechnya border, but also in Zimbabwe and around the world.

When German Chancellor Angela Merkel made her first state visit to Moscow earlier this year, she also made sure to keep things friendly and upbeat. But she broke from tradition – and set herself apart from her predecessor Gerhard Schröder -- by meeting with representatives of humanitarian non-profits, and addressing the crackdown.

“We talked about the fact that there were many objections to the law,” Merkel told news organizations after the Jan. 9 meeting. “I pointed out that when this law comes into force, we will be looking very closely at its application to make sure that NGOs -- for example German foundations that work here in Russia -- will still be able to carry out their work.

Wilkins, of OSI-Brussels, acknowledged that Merkel’s meeting with activists represented a “a change in German policy” and “an important gesture.” But he warned that “at the end of the day, Germany has a small margin to move in, because of its energy dependence on Russia.”

Soon after Putin signed the law on NGO regulation, press reports circulated that a Russian court had banned the German aid group, Hilfe für Selbsthilfe (Help for Self-Help), which provides humanitarian aid on the Chechen border. Yet Help’s press liaison, Berthold Engelmann, said the reports were false and based on a misunderstanding. The group expects to continue to pursue its humanitarian aid work unaffected by any eventual changes to the Russian law, he said.

“There was an investigation (of our registration status) but we were never banned,” he said.

Wilkins said he thinks the law is not aimed at service agencies like Help, but was made to control watchdog NGOs. The outcome depends on how the law is used, he said.

“If it is implemented to the last comma, it could be harmful," he said. "Or, it could be done in a spirit of cooperation… but I doubt it.”

The main idea of controlling the NGOs is for Putin to install his legacy, Wilkins said.

“He is getting ready for the post-Putin era. We are seeing a strengthening of how Russia applies foreign policy,” he said.

“Because of their importance in energy, with something like this NGO law, (Putin) says, ‘I don’t care. I can do it. The West might protest, but at the end of the day, we have some leverage on the West.’"

"And it is true," he added. "The West is moderate in its response to Russia.”

Putin Cagey on Iran Issue After Discussions With Merkel

German Chancellor Angela Merkel arrived in Moscow hoping for a firm offer of support from President Vladimir Putin on the subject of Iran. She left Monday wondering what stance, if any, Russia would take. (Jan. 16, 2006)

German Chancellor Merkel's first meeting with Russian President Vladimir Putin has triggered praise from newspapers across Europe, many of which have compared her style favorably with that of her predecessor, Schröder. (Jan. 17, 2006)

Stable Relationship with Russia a Priority for Merkel

On the heels of her first trip to Washington as chancellor, Angela Merkel embarks on a similar official visit to Russia Monday, where she will meet with President Vladimir Putin. What are the expectations of the visit? (Jan. 16, 2006)