After a shaky start, Europe dominated the 2018 Ryder Cup, wrapping up a convincing victory on Sunday. As well as an impressive team performance, both Sergio Garcia and Francesco Molinari set new records for Team Europe. 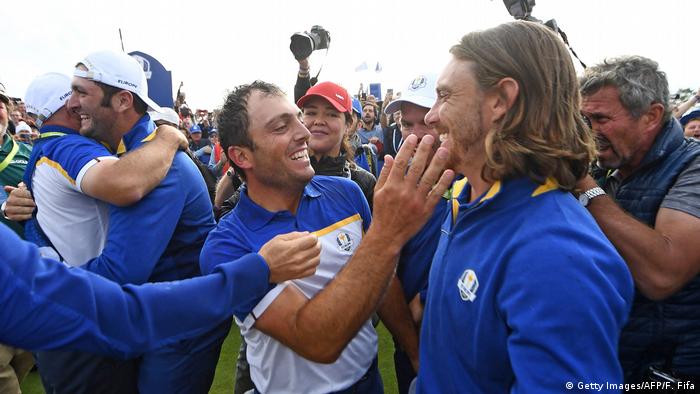 Starting the day with a commanding 10-6 lead, Europe continued to impress in the singles and rubber-stamped a victory that had long felt inevitable when America's Phil Mickelson knocked one in the water at the par-3 16th hole, conceding his match to Italian Francesco Molinari right on the tee box.

That victory, two years after the USA won on home soil, sparked wild celebrations and means the British Open winner is the first European player ever to score a maximum five points in the Ryder Cup and only the second overall since Europe combined to take on the Americans.

"It means so much more than majors, more than anything," Molinari said as he was swamped by yellow and blue clad fans and covered in booze.

"It's hard not to get emotional when you think about the other players, the vice captains, Thomas [Bjorn, the captain], the wives. It's been an incredible week. Obviously they had probably the strongest team ever and were just so good."

Both Mickelson and Tiger Woods, the highest profile players on Jim Furyk's team, failed to score a point for the USA, and Europe won 7.5 points to the US's 4.5 in the singles matches on Sunday to secure a 17.5 - 10.5 win.

"It's disappointing because I went 0-4, and that's four points to the European team. And I'm one of the contributing factors to why we lost the Cup, and it's not a lot of fun," said a despondent Woods.

One of those Europeans to win his personal battle on Sunday was Sergio Garcia. The Spaniard, who has a rich Ryder Cup history, was a wildcard selection from Bjorn and thanked the European captain after the win, which ensured he overtook Nick Faldo as Europe's most prolific player .

“I don’t usually cry but today I can’t help it. It’s been a rough year," the  38-year-old said. "I'm so thankful for Thomas to pick me and believe in me. I am so happy, so happy to get the cup back. It’s about the team and I’m happy I was able to help. It was one of those years when nothing seemed to happen. But I’ve never had so many big cheers as I’ve had this week."

Furyk was magnanimous in defeat, praising his opposite number as he spoke from the Le Golf National course near Paris.

“I’m proud of these guys, they fought," he said of his team. "There was a time when it looked as though we had a chance. We put some heat on Europe in the first five or six matches. We scrapped it out. But hats off to Europe, they played well again."