Europe Recovers From Killer Storm | Europe| News and current affairs from around the continent | DW | 25.01.2009

A major storm took the lives of people in Spain, France and Germany this weekend. Millions more are recovering from the damage Sunday, Jan. 25, in the wake of a storm dubbed Klaus by weather officials. 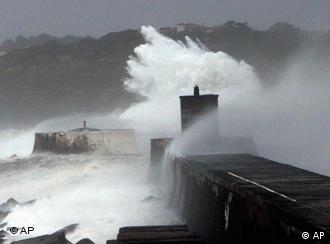 A huge wave hits a pier in southwestern France on Saturday, Jan. 24

The storm, which produced wind speeds of up to 194 kilometers per hour (km/h) as it tore across Europe, left a swath of destruction in its wake, with roads blocked, buildings destroyed, phone service out in much of southern France and train passengers returning home after spending much of Saturday in immobilized trains.

Eighteen people are thought to have died. Spain suffered the highest death toll.

Four children were killed when the roof of a sports hall collapsed in the town of Sant Boi de Llobregat near Barcelona on Saturday. Two adult trainers and 13 children were injured.

Radio reports said about 30 people were in the indoor arena when the incident happened, seeking shelter from the storm.

Eight other deaths Friday in Spain included: a traffic officer killed by a falling tree; a 52-year-old woman crushed in central Barcelona when a wall collapsed on her; and a fishermen who died during a rescue operation. Some of the others were killed by falling trees.

There were four deaths in France. 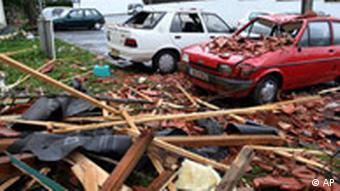 Debris from buildings lies shattered in the street in southwestern France

A 78-year-old man died near Dax when he was struck by flying debris. Two car drivers were killed when their vehicles were hit by tree. Another woman died because a machine that helped her breathe cut out when the power failed.

However, weather officials said there would have been more deaths if their early warning system had not worked so well. Additionally, they said the storm's effects were limited because it was largely concentrated on only three regions.

In Germany, one man died when he was struck by a barn door that had been blown off its hinges and another was killed in a car accident caused by slick roads. 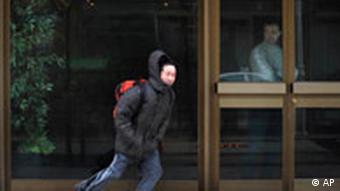 A man struggles to walk against high winds in northern Spain

As the affected areas recovered from the storm Sunday, French energy provider EDF said millions of people remained without power across southern France and noted that repairs would take more than a day. Tens of thousands lacked phone service of any kind. Some families were homeless after the storm ripped the roofs off their houses.

Authorities lifted bans on road use in France, though they noted that many trees continued to be in danger of collapse.

In Spain, winds intensified two wildfires, forcing 15,000 people to evacuate their homes. In Galicia, a school and a swimming pool lost their roofs.

Experts, in radio reports, compared the storm to a devastating winter storm which struck France and other parts of western and central Europe in 1999. Climate experts said the storm's destructive strength was further proof of the dangers of climate change.

German Weatherman Gets a Feline Surprise

In the good old days it wasn’t uncommon to see some pretty creative props employed by weathermen and women, but most of them were intentional and few of them were alive. (09.01.2009)