Europe reacts to Srebrenica declaration with both praise and reservation | Europe| News and current affairs from around the continent | DW | 31.03.2010

Europe reacts to Srebrenica declaration with both praise and reservation

The Serbian parliament has narrowly passed a declaration condemning the killing of 8,000 Bosnian Muslims in Srebrenica. The declaration stops short of labeling the killings genocide, and for some, that is not enough. 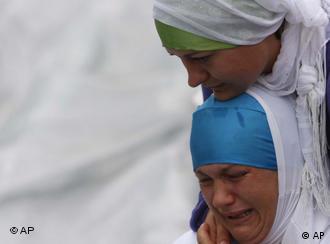 The massacre killed some 8,000 Bosnian Muslims

Serbian lawmakers passed the condemnation of the Srebrenica massacre by a razor-thin margin, with 127 out of 250 parliamentarians voting for it. The support came from the ruling coalition of Democrats and Socialists.

Serbian nationalists have vehemently opposed the declaration, claiming that the deaths in Srebrenica did not differ from atrocities committed against Serbians during the 1992-1995 war in Bosnia and Herzegovina.

Spokesmen for the European Commission and for the Netherlands, which hosts the International Criminal Tribunal for the former Yugoslavia (ICTY), praised the declaration and called it a step along the way to Serbia's European integration.

Serbia has been an official candidate for membership of the European Union since late last year, but the Netherlands, whose lightly-armed troops in Srebrenica were overpowered by Bosnian Serb forces in the massacre, has been blocking Belgrade's accession.

Genocide 'is a fact' 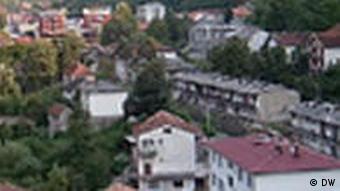 Despite reaping praise in Europe, the vote in favor of the declaration also sparked disappointment among European politicians and human rights advocates.

Doris Pack, a German member of the European Parliament, said the declaration did not accomplish its goal of reconciliation with history.

"The genocide in Srebrenica is a fact, you cannot mix it with anything else," she told Deutsche Welle. "You can never begin to apologize if things are done in this way."

Survivors of the 1995 massacre were also critical of the outcome. Munira Subasic, head of the group "Mothers of the Enclave Srebrenica," said the weaker declaration was a missed opportunity for Serbia.

"It is shameful that even 15 years after the massacre, Serbian parliamentarians could have written genocide, but instead spoke of wrongdoing," she said.

Sarajevo-based journalist Erich Rathfelder said, while the declaration was a step forward for the interior policy of Serbia, it contained too many compromises.

He added that the idea behind the expulsion of non-Serbian citizens of Bosnia and Herzegovina was still alive in the existence of Republica Srebska, one of the two semi-autonomous regions that make up the country.

This is not bearable from the point of view of human rights and of people who want to resolve the problems of the past, want to have a real reconciliation," he told Deutsche Welle. "A reconciliation means also that one cannot accept the results of this nationalistic fascist policy." 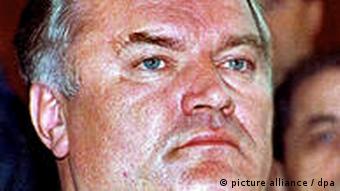 Mladic is suspected to be hiding in Serbia

Rathfelder said another obstacle to reconciliation is Serbia's failure to arrest Ratko Mladic, the Serbian ex-general wanted by the International Criminal Tribunal for the former Yugoslavia and believed to be hiding in Serbia.

"Srebrenica is only a symbol, Srebrenica was the end," he said. "But remember '92, what happened here. This was brutal genocide, this was ethnic cleansing, this was rape, harassment and so on. And the guilty ones of this time have still not been punished enough for this."

The man in charge of Serbia's hunt for war criminals has resigned after he failed to track down former Bosnian Serb general Ratko Mladic. (29.12.2009)