With a 2-1 win on the night, Wolfsburg march on to book their spot in the Europa League quarterfinals for the second time. Dieter Hecking's side have now won 10 of 13 competitive matches in 2015. 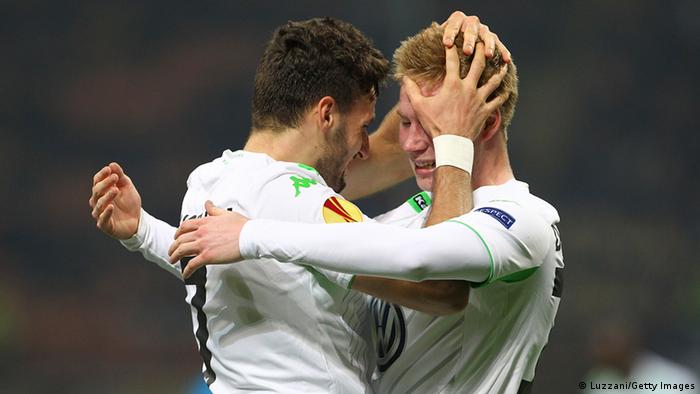 Wolfsburg will be included in Friday's draw for the quarterfinals of the UEFA Europa League following a 5-2 aggregate win over Italian giants Inter Milan. With a 3-1 first leg win at the Volkswagen Arena behind them, strikes from Daniel Caligiuri and substitute Nicklas Bendtner completed the job.

Caligiuri, who fittingly hails from a family of AC Milan supporters, turned up to pounce on 24 minutes and hand the Wolves an all-important away goal. With a three-goal advantage, the contest was practically over, but Rodrigo Palacio's strike with around 20 minutes to play handed the Italians a late lifeline before Bendtner's sharp finish with one minute left hammered home the result.

Having coming close after five minutes, Caligiuri finished off a brilliant move from the visitors. Defender Timm Klose - standing in for the suspended Naldo - curled the ball expertly down the line to De Bruyne who then added his fifth assist of the competition, picking out Caligiuri, who bundled the ball over the line. 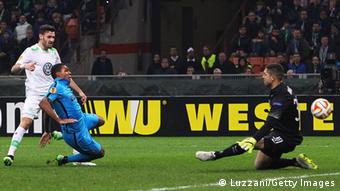 De Bruyne assisted Caligiuri, who fires Wolfsburg into the lead

As Wolfsburg's chief creator - he's had a hand in 38 goals in 38 games this season - De Bruyne's movement across the front line caused Inter all kinds of issues. The Belgian's pace was equally dangerous on the counterattack and Bas Dost was unlucky not to add a second goal midway through the first half. Caligiuri was then denied by Inter keeper Juan Pablo Carrizo on 38 minutes.

Carrizo kept Inter in the tie after the interval, denying Dost for a second time at the end of another Wolfsburg counterattack inspired by De Bruyne. Yet even with Wolfsburg controlling the encounter, Inter sparked into life on 71 minutes with Palacio sneaking past a few defenders before beating Benaglio from close range.

Inter's efforts were timid in the last quarter of an hour - and Wolfsburg closed the game out easier than perhaps imagined when Maxi Arnold laid off intelligently to Danish striker Bendtner, who fired home to book a spot in the last-eight for Germany's only representative left in the competition.

Europa League Round of 16 results:

Wolfsburg on the verge of quarterfinals in Europa League

Wolfsburg have some work to do if they want to complete the 'Italian Job' over Inter Milan. But with a solid advantage, the Germans will be keen to continue their impressive campaign. (19.03.2015)

A virtuoso display from the Belgian midfielder gave the Bundesliga side the upper hand in its Europa League first leg against Inter Milan. The Italians managed an away goal but Wolves scored three of their own. (12.03.2015)