Borussia Dortmund will join Schalke and Augsburg in tomorrow's Europa League draw after thrashing Norwegian side Odds BK 11-5 on aggregate. Marco Reus scored a hat-trick as the Bundesliga side came from behind to win. 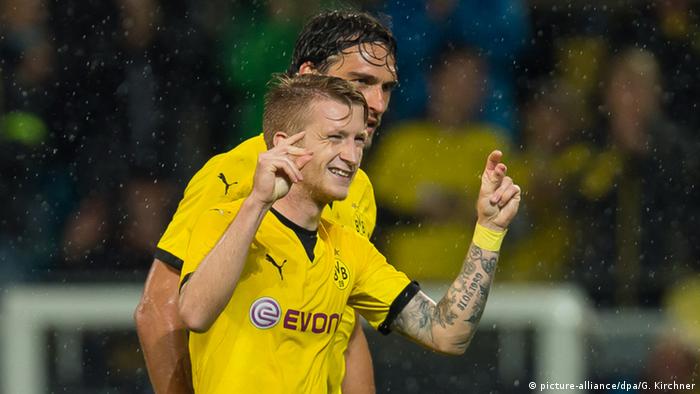 Marco Reus scored a hat-trick to fire Borussia Dortmund to the group stages of the UEFA Europa League with a 7-2 win (11-5 on aggregate) over Odds BK at Signal Iduna Park.

Four goals inside 15 minutes was the perfect response to the Norwegian side taking the lead in the 19th minute. Shinji Kagawa and Ilkay Gundogan hit the back of the net before the hour mark to put the icing on the cake.

But Reus' performance was key to the win - the former Gladbach man scoring two before the interval and one on 57 minutes. "We were the better team and it was only a matter of time until we scored the first goal," Reus said post-match.

The German striker started as the most advanced forward in yellow with Pierre-Emerick Aubameyang dropping to the bench. Jonas Hofmann returned to the side, while Matthias Ginter retained his spot at full-back following his impressive performance at FC Ingolstadt this weekend.

Despite dominating from the first whistle, Dortmund couldn't convert their superiority into goals. Odds BK goalie Rossbach impressed early on, punching clear a shot from Reus in the fourth minute. He made a fantastic triple-save on 12 minutes to deny Ginter his second goal in two games and a shot from Hofmann.

But on 19 minutes, the visiting side silenced the home crowd momentarily as Halvorsen headed in from inside the six-yard box. The lead lasted six minutes before Armenian playmaker Mkhitaryan thumped in a spectacular equalizer to continue his excellent form this season. 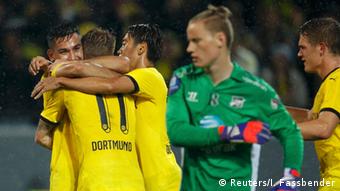 Within two minutes, the Germans were home and dry - Gundogan excellently slalomed past two defenders before drawing the ball back for Reus who opened his account for the evening. Gundogan was the architect again on 31 minutes, chipping the ball on to Mkhitaryan whose draw back was tapped in by Reus.

Kagawa hit a goal before the interval and Gundogan deservedly got himself on the score sheet on 50 minutes to send Dortmund into an unassailable 9-4 lead on aggregate. Mkhitaryan picked out Reus on 57 minutes for the forward to net his hat-trick from close range.

Oliver Berg's shot was a consolation on the hour mark, but a sweet finish nonetheless. In stoppage time, Kagawa added a seventh to the score line to complete an excellent attacking performance and book Dortmund's spot in the draw tomorrow alongside Schalke and Augsburg.

Meanwhile, Dutch giants Ajax held out for a 1-0 aggregate win over Jablonec, while Saint-Etienne and Sparta Prague also secured a spot in the group stages.

Greek heavyweights Panathinaikos were surprisingly dumped out by Qabala from Azerbaijan and both Fenerbahce and Rosenborg add some strength to the next stage.

Having trailed Odds BK by three goals, Thomas Tuchel's men won't have many complaints about the end result. A winner from Henrikh Mkhitaryan puts the Bundesliga side in pole position for a spot in the group phase. (20.08.2015)

After three points in the Bundesliga on Saturday, Europe is back on the agenda for Borussia Dortmund. Without Marco Reus, Thomas Tuchel's side head north to face Norwegian cracks Odds BK for a place in the group stages. (19.08.2015)