Ajax have moved to within touching distance of their first European final for 21 years. The Dutch side, who overcame Schalke in the quarterfinals, overwhelmed Lyon with a breathless display of attacking football. 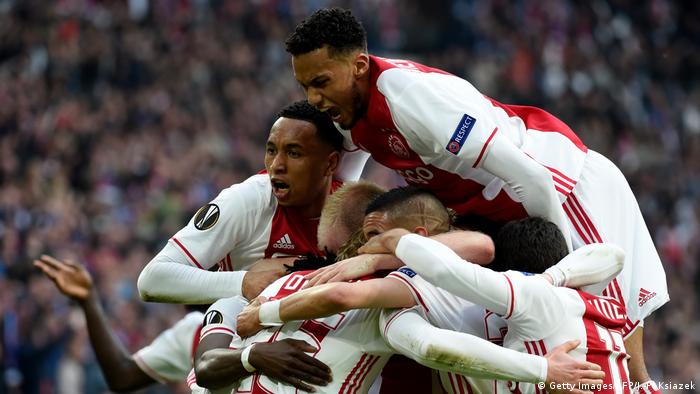 Ajax stand on the verge of the Europa League final after thrashing Olympique Lyon 4-1 in the first leg of their last four clash in Amsterdam on Wednesday.

The four-time European champions started slowly but broke the deadlock courtesy of Bertrand Traore's header, with the Burkinabe leaping between a crowd of defenders to send a glancing header into the far corner from a Hakim Ziyech free kick.

Ajax doubled their lead through Kasper Dolberg before the break and Germany U21 winger Amin Younes added a third early in the second half. Mathieu Valbuena pulled one back for the French visitors but Traore, on loan from Chelsea, fired in from close range for Ajax's fourth in the final 20 minutes.

Four-time European champions Ajax had plenty of chances to add to their tally as Lyon, whose star striker Alexandre Lacazette only started on the bench as he returns from injury, went looking for a second away goal.

The Dutch side's last European final appearance was in the 1996 Champions League when they lost to Juventus on penalties.

Spanish side Celta Vigo host Manchester United in the first leg of the second semifinal on Thursday, with the final taking place at the Friends Arena in Stockholm on May 24.