Jose Mourinho's men are the favorites going into the final, to be held at the Friends Arena in Stockholm. However, they will be facing the most talented young squad Ajax have produced in years. 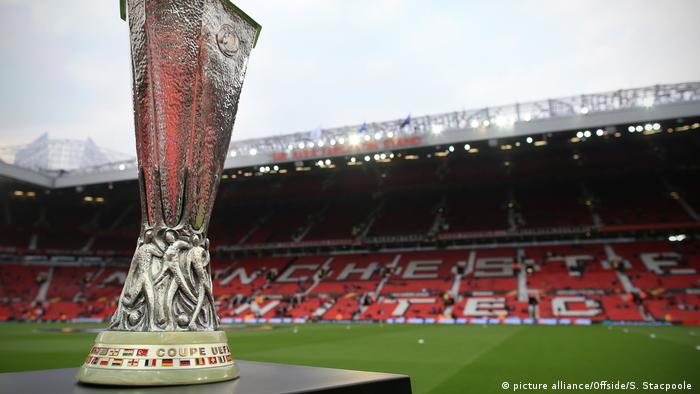 Both of the clubs involved in Wednesday's Europa Cup final are steeped in tradition built partly through periods of European dominance in years gone by. Now both are looking to take this opportunity to rekindle their former glory on the continental stage but, more immediately - to take the chance to guarantee the automatic passage to the group phase of the next season's Champions League that goes with lifting the Europa League trophy.

Given their sixth-place finish in the Premier League, the stakes are particularly high for Manchester United and their first-year head coach, Jose Mourinho. The Portuguese manager has given the Europa League precedence in the latter part of United's season, with the Red Devils finishing seven points outside of the top four in England's top flight.

Whether or not United's season is seen as a success, now rides on the final at the Friends Arena in Stockholm. Mourinho, who won the UEFA Cup (as the Europa League was then known) with Porto in 2003, has chosen to rest many of his key players in domestic matches.

"It was not a gamble. It was a simple decision," the United manager said after his team's final Premier League match of the season, a 2-0 win over Crystal Palace on Sunday.

Rashford has been United's go-to man since the injury to Zlatan Ibrahimovic in April, with crucial goals at home to Anderlecht and away to Celta Vigo. At the same time, Ander Herrera's relentless work alongside Paul Pogba in midfield has made him a fan favorite at Old Trafford.

United finished in second place behind Fenerbahce in their group before going on to dispatch Saint-Etienne, Rostov, Anderlecht and Celta Vigo in the knockout stage. Failure to add a second trophy to the League Cup win in February would put Mourinho under pressure.

"United still measure themselves on trophies won, not the fact they have finished outside the Champions League positions in the Premier League," former defender Phil Neville told the BBC.

However, failure to reach the Champions League group stage for a second-straight season would reduce the revenue that United get though their partnership with Adidas by 30 percent - or 24 million euros ($27 million). It would also reduce the club's power to attract top talent in the summer transfer window.

Manchester United cancelled Tuesday's pregame press conference at short notice in light of the attack in at the end of a pop concert in an arena in the city on Monday night that killed 22 people and injured dozens of others. 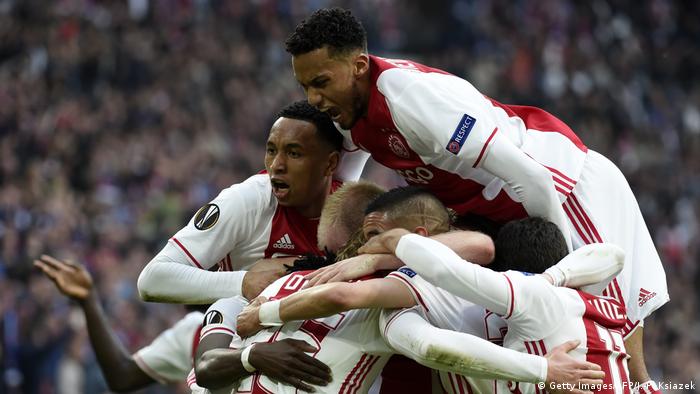 Historically Ajax, who finished second in the Eredivisie this season, are one of the most iconic clubs when it comes to European competition. Through the 1970s, the club collected three European Cups and largely redefined the game with Johan Cruyff in the side.

They are one of only four clubs to win all three major European tournaments - the European Cup, the UEFA Cup and the European Cup Winners' Cup. Bayern Munich, Juventus complete Chelsea this illustrious quartet.

Ajax's recent history, however, has been one of constant strife between those who follow the Cruyff values - the "total football" philosophy - or those who back former coach Louis van Gaal. Although the late Cruyff hasn't lived to see the success of what has been dubbed the "Velvet Revolution," the future looks bright.

Former European champion Marc Overmars was installed as sporting director in June 2012. Edwin van der Sar returned to the club as marketing director, while Dennis Bergkamp got involved in the club's academy. In Peter Bosz, the club's head coach since 2016, Ajax have found one who strictly follows the Cruyff ideology. 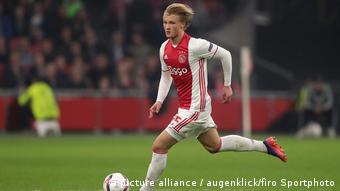 Dolberg has scored 16 goals in the Eredivisie

The 33-time Dutch champions are reaping the benefits from the project, which began four years ago. On May 21, the club fielded the youngest starting 11 in Eredivisie history with the captain, Davy Klaasen, the oldest player on the pitch at the age of 24. A seemingly endless stream of talent from De Toekmost, the club's academy, has rekindled a connection with the spirit of Cruyff.

Klaasen is one of the academy's graduates, but there are countless others. Matthijs de Ligt, 17, has been at Ajax since the age of nine. Justin Kluivert, son of the legendary Patrick, has become a regular in the side at the age of 18, while 19-year-old Kasper Dolberg of Denmark is arguably one of the most promising center-forwards in the game. Even the average age of the starting lineup for the second leg of Ajax' semifinal in Lyon was 22.

However, Ajax, like others before them, will have a tough time avoiding seeing their roster decimated as Europe's elite clubs can be expected to sweep in for their best young talent.

"The Dutch league is not one of the strongest five leagues in the world or even Europe and that's why it is difficult to maintain," Van der Sar told the Reuters news agency.

This means that Wednesday's final could turn out to be the finest collective hour for the greatest generation that Ajax have produced since the 1990s.

Manchester United and Ajax both lived dangerously despite first-leg leads to secure a Europa League final meeting in Stockholm on May 24. Both sides went in front on Thursday but both came close to throwing it away. (11.05.2017)

Schalke knocked out by Ajax in Europa League thriller

Goals from Leon Goretzka, Guido Burgstaller and Daniel Caligiuri looked to be sending Schalke through to the semifinals. But Ajax hit back twice in extra time and progressed on aggregate. (21.04.2017)